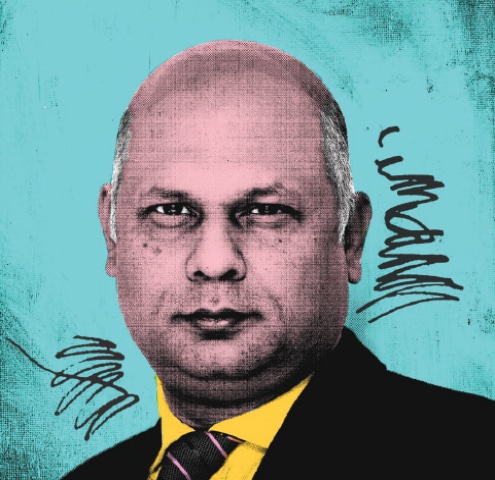 Harris Khalique is a poet of myriad sensibilities. Like his cosmopolitanism his poetry encompasses tradition and modernity; the urbane consciousness as well as snippets of the folk wisdom. As a bilingual poet, Khalique is even more important in a country partitioned between the two literary worlds: the native vernacular and the hip, well cut out English domain. A few months ago, I attended the launch of his new collection of poems, ‘Melay Mein’ and heard the poet recite these poems. Reading and listening to poetry are two separate and distinct experiences. I re-read the slim volume, eight in his oeuvre and realized that Khalique had actually moved on. The earlier bohemian and carefree Khalique, as he was a decade and a half ago when I first met him, is a different person in this collection. A more anguished soul can be detected under the layers of verse and rhyme. There is evidently a greater reconnection with the past as Khalique invokes the folk, the subliminal as well as the perennial metaphors of our consciousness such as Imam Husain (AS).

The poem that inspires the title is instructive. Melay Mein talks of a mother’s concerns whose child is lost in the maze of life. The pain in this poem is universal and so is the metaphor. Of losing the creativity and the fear of loss. Note the power of these lines:‘jiss ka bacha/ jahan-e baazi giraa’n ke melay mein/ kho gaya hai’. The world is cruel and uncertain and full of charlatans and this is what Khalique’s other poems in this collection also convey. In another poem Ghao, there is mention of dark worlds and demons:

Harris is also a political activist and an idealist. His activism and political writings are well-known. This is why Melay Mein is deeply political. It takes a view of the world from the below and thus invokes the stories and characters of ordinary men and women. There is a clear pattern here. The poet is consciously trying to break the mould of Urdu poem and its subject matter confounded by the ornate, the limited subjects of conventional Urdu poetry.

Another powerful poem is “Ghulam Azam Musalli”. The low caste, spurned Musalli is a symbolic character who exists in every nook and cranny of Pakistan and perhaps North India. Burdened by his master the powerful landowner whom he serves day and night lives in a burning hell day and night. Whilst Ghulam Azam continues his work, he also deals with the severe allergies and illnesses that a hard life has earned him. His sense of loss (in this case of a son who died at the time of birth) represents the plight of an entire underclass that most of us choose to ignore in the pursuit of optimism and positive worldview.

Khalique’s humanism reminds us of Manto. For instance the characters who die at the hands of police in Karachi’s slums were just ordinary humans who led regular lives plagued by their circumstances. In this quest for versifying the folk lives Khalique turns into a chronicler, a sensitive narrator and a poetic. Almost as if he is a Nazeer Akbarabadi of his times.

There is a multitude of references to Karachi, to its lanes and roads much like Khalique’s earlier poems. But this is more somber view of his native city: For its merges into the kaleidoscope of a brutalized Pakistan. A country tormented by its power structures and falling apart due to the wounds that its men and women suffer day in and day out.

But there is also an underlying and recurring theme of resistance. There is a poem which talks of a new national anthem. Naya Tarana is where the poet speaks of a new state, of a new politics that responds to the diversity of Pakistan, its inherent pluralism and its deep-rooted injustices.

Few writers have called Harris Khalique’s recent poetry of melancholic nature and his visible spiritual leanings as ‘weariness setting in.’ Personal indulgence could also be seen as a reflection of some experiences that come at a certain stage in an artist’s life and may be seen as composure rather than weariness. Besides, being secular and pluralistic in political outlook has never constrained him from using symbolism from the Quran, other scriptures and pagan mythologies. His pluralism emanates from his own Indo-Muslim tradition, which is rooted in an amalgam of Vedic, Islamic and Western civilizations.

Khalique’s personal journey is quite evident in this collection. The earlier poet is more composed, a little serious and fiery in his quest for a better society.