The literati in India and Pakistan are grappling with the larger question of Qurratulain Hyder’s stature in Urdu, and some would say, World literature. The Daily Times, Pakistan has published an appropriately titled editorial, Quratulain Hyder, Urdu’s greatest novelist. This paragraph struck me:

…her view of culture was intensely pluralistic, explaining Muslim culture too in a transmigratory technique in her big novel Aag Ka Darya. The Pakistani public paid her a back-handed compliment by making her books bestsellers in Pakistan; but most of them were pirated, meaning that someone other than her got rich selling them. She was always a chronicler, a kind of Tolstoy in Urdu that our critics have ignored. When someone asked her in Bombay to write about the Iran-Iraq war she naturally began with the Arab conquest at Qadissiya.

Outlook India had to say this:

Only a few days back, to mark the 60 years of Independence, when we asked an eminent jury to pick out 60 Great Indians in 60 years of our Republic, the name of Qurratulain Hyder was introduced prominently as Urdu’s Marquez.”Through her novels and short stories, this prolific writer gave Urdu fiction a brave and endlessly inventive new voice,” we wrote, and quoted the London Times: “Her magnum opus, Aag Ka Darya (River of Fire), is to Urdu fiction what A Hundred Years of Solitude is to Hispanic literature

In C M Naim’s piece, published in the Outlook:

What counts, for her, is the human spirit and the relationships it generates and nurtures. That is where the linearity of time seems to curve into a spiral, urging us to recognize a past that never quite disappears…..What, then, is our choice as individuals? Here it may be worthwhile to recall the characteristically modest, even self-mocking, remarks that Hyder made in 1991 in her acceptance speech at the Jnanpith Award function: “My concern for civililzational values about which I continue writing may sound naive, wooly-headed and simplistic. But then, perhaps, I am like that little bird which foolishly puts up its claws, hoping that it will stop the sky from falling.“

and he concludes with this superb analysis:

…what Hyder tacitly offers us is nothing but that wise Candidean response: even in the best of all possible worlds, it is best not to neglect to tend our garden. Certainly, through the several thousand pages of her writings, she has shown herself to be an eloquent witness to that truth.

(photo left- Gauri Gill 2005) The Indian Prime Minister Manmohan Singh also expressed the sense of loss: “..In her unfortunate passing away the country especially Urdu literature has lost a towering literary figure. She will be truly missed in literary circles in the country.’

Read Jawed Naqvi’s piece in the DAWN; and reactions of various writers in the daily NEWS . Rediff has published an article entitled,Â She was one of a Kind. Javed Akhtar, the eminent Indian lyricist has paid this grand tribute and held that she was a true genius and rightly said that he felt sorry for those people who read fiction but had not read Hyder:

“When I say that it is a great loss, it’s not only to Urdu literature, not only to Indian literature, but to the word literature. I am not exaggerating at all.. the years to come, Haider’s novels will reach everywhere.”

“The kind of work she has done… its only because she was born in a third world country and wrote in a language that is not of the imperialistic powers, her novels have not reached everywhere. I am sure the time will come when they will reach..”. 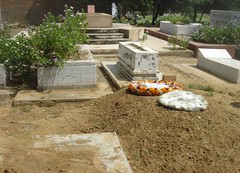 The blogosphere is also remembering Ainee Apa with great respect. Desicritics published An Enigmatic Icon, Adnan wrote a lovely piece on Ainee Apa and her books entitled A legend passes away and 3 Quarks Daily also remembered her. Urdu India has a brilliant post here and another tribute can be foundÂ here. Pakistaniat carried my post – click here to see the comments. And the best was from Delhi Walla, who went to the Jamia graveyard and took some great photos.

This will continue given the sad traditions of our literature – the literary and civilizational merits of authors and poets have often been discovered after they left this world. Having said that Ainee had established herself given her powerful voice and unique style of writing. But her real stature as Javed Akhtar says is yet to be discovered.

About the photo (top left): Gauri Gill in the Outlook writes:

Qurratulain Hyder was first photographed by Prashant Panjiar in what was a coup of sorts, everyone talked of how elusive and difficult she could be. When I met her last week to persuade her, she said, ‘Tell the magazine I’m a difficult woman.’ I told her that was her reputation anyway. For the first time that afternoon she cracked a grin. She seemed flattered.

Next Post
The plight of Bahadur Shah Zafar’s descendants

Sartaj Aziz, former foreign minister of Pakistan and author of Between Dreams and Realities: Some