“Expanding the Potential of Experiencing Life” 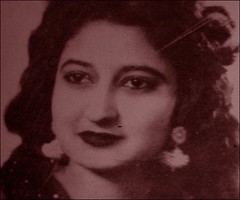 The death of Qurratulain Hyder has generated a spate of comment, obituaries and tributes. Each day I receive several emails, find new posts and articles on the internet and of course sweet little discoveries.

SG has again discovered and promptly forwarded me this interview with BBC Urdu- a nearly half an hour audio-clip. I had posted the link to another interview that was recorded in the early 1990s. This one was recorded nearly a decade later. One can hear Hyder’s Â weak voice after the stroke she suffered.Hyder also laments that she has difficulty in writing and now she dictates to students. She adds that it is not a pleasurable process as the Â ‘relationship with pen and paper’ is lost.

In this interview, we hear of her childhood, her short stay in the Andaman Islands, the imprints of British imperialism, the pre-partition culture of tolerance and how things changed in India and Pakistan. 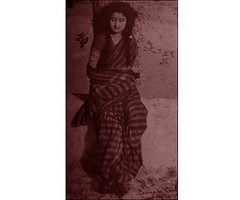 Ainee’s love for travel and exploring new places and meeting people also comes out clearly from this interview. We can assume that she received much inspiration by travelling. We hear all about her books as the interviewer discusses her works in some detail.

However, the interviewer is careful not to praise her too much as she was known to get irritated by an over-dose of compliments. But he does mention that by writing Kare Jahan Daraaz Hai Ainee had established a new trend of a creative and realistic autobiography as opposed to exaggerated sense of the self that many writers display in Urdu literature.

After years, I picked up the 2001 edition of Kare Jahan and started reading it again last night. As the literary critic C. M. Naim said, this book expands the “potential of experiencing life. What more can a reader ask of his author?”

Kare Jahan is a family chronicle, an autobiography, a creative journal and a novel at the same time! Navigating through its interconnected stories, social commentary and ambiance, the reader, slowly, becomes a part of the narrative; and starts viewing the world in a different perspective. I have yet to read another book that so effortlessly blends disparate genre of writing with such abandon.

Ainee’s interview in thisÂ audio clip should not be missed.

Aini Apa’s memory was extraordinary and flawless, her intelligence was dazzling, her knowledge of Urdu, Hindi, and English literature, archeology, dance, classical music, (her last book is a biography of Ustad Baray Ghulam Ali Khan), painting, etymology and history was astonishing. I never heard her utter a platitude in all the times I have spent with her, and she was equally brilliant in both Urdu and English. Aini Apa was a fantastic mimic and could adopt a series of perfectly authentic regional accents. She thoroughly enjoyed a good joke, especially if it involved her.

And, this beautiful letter written by her nephew, Saif Hyder Hasan that talks of the personal loss faced by Ainee Apa’s family:

Fame also played cupid for a bit. K.A. Abbas, journalist, author, film producer, began to correspond with the London-based novelist. Love happened, and a tryst. But it was a disaster. Abbas, the story goes, turned up in a bright blue suit. Qurratulain, always particular about appearances, took an instant dislike to the suit, and the man. “I can’t marry a man who doesn’t know how to dress,” was her now legendary response.

264 thoughts on ““Expanding the Potential of Experiencing Life””