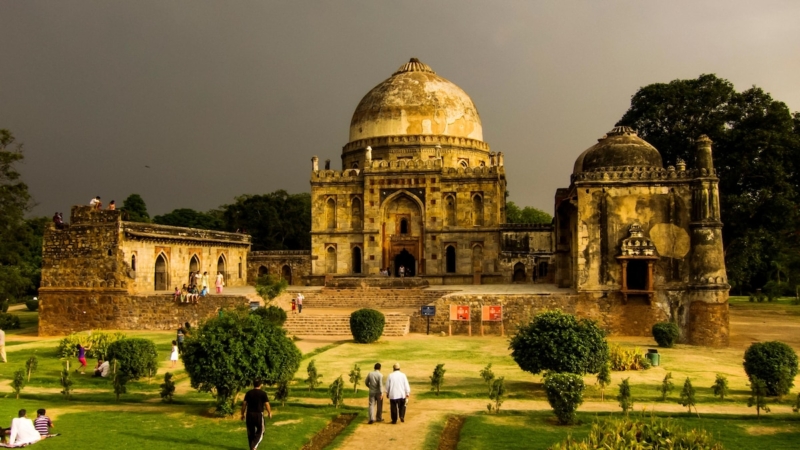 In the final part of this series, I recount the last few days of the media expedition to India

Pakistani media persons landed back in Delhi after a whirlwind tour of Mumbai and Bangalore. Once back at the Maurya Sheraton, we had the last few days of the tour planned well in advance. A sizeable number of the visitors were taken to the ephemeral Taj. Thankfully this was not mandatory, as some of us wanted to stay back in Delhi, especially those who had seen the Taj during their earlier visits.

Pakistan’s High Commissioner, Mr. Shahid Malik invited us for lunch, and this was my first visit to our stunning High Commission located in Chanakyapuri, New Delhi’s diplomatic enclave. The sumptuous lunch cooked with much aplomb was preceded by a lively discussion about our trip and our impressions regarding the possibility of peace.

Pakistan’s diplomatic haven is a well-designed building merging Islamic, Indian and Western sensibilities. The blue-domed structure merges well with Delhi’s vista of monuments, some well- kept and others neglected. This is an irony, at its best! Nevertheless, this was familiar territory.

Mr Malik is a seasoned and affable diplomat who knows the art of using the choicest phrases and words. Among our diplomatic corps he is perhaps the best India expert due to his substantive experience of serving there in several capacities. The present government has extended his tenure, noting how we need an ambassador who is not just suave but also well-ensconced with Hindustan and its myriad moods.

During our meeting with him, he was candid and said many things that cannot be printed. Briefly, he articulated the Pakistani position on the necessity and importance of continuous dialogue. He took note of what we said and found our impressions to be quite positive. During lunch, Mr Malik mentioned how he was keen for us to meet the Pakistani Foreign Minister upon our return to the homeland. That meeting did take place two days prior to the Indian Foreign Minister’s arrival. Unfortunately I could not attend but my dear colleague Shaukat Piracha read out my thoughts, a sample of which were:

“…we found a willingness among Indians for engagement with Pakistan. This bodes well for the peace talks, and Pakistan should ensure that we strengthen formal as well as backchannel diplomacy… Pakistan should demonstrate its resolve to pursue a proper investigation with respect to the Mumbai suspects, without compromising our national interests. India is keen for regional peace and stability as the growth momentum in India is now a self-propelling reality. Pakistan should benefit from this dynamic by expanding trade and economic ties.”

Coming back to our diplomatic setting in Delhi, a few of us were categorical in saying that public opinion in Pakistan was always behind the dialogue process, and in recent times against militancy and extremism. Who would disagree that the issue of militant groups has become a nightmare for the elected governments both in India and Pakistan, as the electorate wants security and economic progress, and militancy only leads to war and further impoverishment.

The dossiers on Mumbai took some time in our discussions at the High Commission’s stately meeting room. But I wanted to raise another issue that is now plaguing the way Pakistan is perceived in the ‘Other’ land: Stereotyping. I suggested that Pakistan should invest in building a more ‘real’ image of our country and its inhabitants through more cultural delegations, parliamentarians’ visits, as well as through promoting Pakistani arts and crafts. Indian public opinion, thanks to the western media and Indian TV, views Pakistan as a country full of ‘terrorists’. Other than terror attacks little mention is made of a neighbour that some Indians have written off. Our destinies are intertwined and denial on either side is self-defeating. It is time that the hawks on the Indian side should not misrepresent us.

This is why most members of our delegation felt that media restrictions need to be lifted on both sides. I believe that the information flow has to be negotiated as an essential right of the peoples in the subcontinent, and not considered as a favour by warring states drunk on their sixty-year-old nationalisms.

This substantive trip was now coming to an end. From the High Commission, we got dropped off at various points for last minute shopping, media interviews and the relentless pursuit of stories. Alas, my colleague Asim Awan who was in Agra viewing the Taj asked me to buy him goodies for his family as most of the delegation members were due to leave by the next morning flight via Wagah. Anjum Rehman who disappeared in the Delhi maze also asked me to buy stuff for her.

There I was in Khan Market, the up-market shopping area close to where Khushwant Singh lives, and where the Capital’s chatterati and sometimes the glitterati are found. I had to purchase a minimal amount of fifteen packs of kaju ki barfee . Bengal Sweets was the place that Asim identified and I waited while the staff at the outlet negotiated with the deliciously displayed assortment of sweetmeats. I had a Rasgullah, a bit of Gujarati dhokla (made with a fermented batter of chickpeas) and greedily ended my gluttony with a Ramdana (amaranth seed) laddoo. Then I found time to browse through the glitzy shops at the market.

Contrary to the Mall culture booming across India, Khan Market is a high street experience. I am claustrophobic in Malls and therefore a place like this was a godsend. I hopped across various points: Bahrisons for new book titles and informative books for children, Shahnaz’s Store to buy a present for a dear friend and a chemist run by Sardarjis to procure cheaper medicines. Yes, the consumers pay much less for the same drugs we buy.

As I ventured back to the sweet shop, the first monsoon of the rains came from nowhere. This was an intense and thunderous shower. Little did I know how this monsoon cycle in a few weeks would devastate Pakistan. If I were a clairvoyant I would have despised the rain. But I confess that I did not. In that moment of abandon, I headed back to the shop, picked up the well-packed stuff and walked into a heavy downpour. The best thing was to see so many people in the rain – carefree, drenched and oblivious.

But Delhi, the venue for the forthcoming Commonwealth Games was very soon paralysed in this rain. By the time the roads were jammed, I was safely back in my unreal hotel room. But I could not go out. Others trickled in one by one, all wet and harried, a bit shocked at the way the Indian capital had stopped like an old clock.

Our hosts bid us a warm farewell with tons of photos and a small replica of the Taj Mahal. Next morning, our adventurous colleagues left via Amritsar, while I opted for a lazy flight straight to Lahore. Travel through Wagah does not excite me, where man-made borders, paramilitary-show offs and inane bureaucracies greet you on both sides.

The next twenty-four hours were free of official bonds, schedules and diplomatic niceties. This was the time to make my own schedule and do things that I wanted to. But time was barely on my side. Rarely have I been so punctilious and organized as was the case this time. An extension in my stay was not feasible and squandering time not an option.

I headed straight to a taxi-stand and embarked on a socio-cultural trident. First, a meeting with Dr Amita Singh who heads the Jawaharlal Nehru University’s Centre for the Study of Law and Governance, to discuss the forthcoming conference of a research network that I am part of. I was visiting the serene campus after many years. Dr Singh and I spoke about academic and non-academic matters, chatted over a cup of tea and two kachorees, and I collected a book in which my paper had been published, and another volume that I had edited.

The next halt was at Khwaja Bakhtiyaruddin Kaki’s dargah (shrine) in Mehrauli, and I walked around the place looking for lost tombstones. It was wonderful to get a peaceful respite here after several hectic days. But this was a short-lived experience, as I had to stop by at Vidya Rao’s place next door. Within twenty minutes, from a decrepit locale I was in a modern apartment building sipping adrak chai and chatting with Rao – a singer, editor, spiritualist and above all a patron of cats that she finds at dargahs. Within an hour I was with the Dehlvi family and later at the quiet, sleepy Nizamuddin Auliya’s shrine. The evening was mellow and a lone qawwal was ending his little devotional act. He sat there without an audience and floated musical notes into the air with a little harmonium. His repertoire had gone home but this lone performer filled the emptiness of the courtyard.

Visiting India as a media representative has its ups and downs. The curiosity about Pakistan is endless and one is supposed to answer all sorts of questions with some measure of responsibility. I noticed how perceptions change with your ‘professional’ identity. Opinions and comments are solicited or given with certitude. However, Pakistan’s media and its growing influence in the country is increasingly being acknowledged. This is quite an achievement for an institution that was always under siege and had to struggle hard before this bout of independence. It is good that the Indian establishment has also recognized the need to engage with the fourth pillar of the Pakistani state. Now it is about time that Pakistan does the same. Without a formidable public opinion behind peace, the normalization of inter-state relations is not possible.

While waiting for the plane to Lahore, I met our former High Commissioner Aziz Ahmad Khan, who was in Delhi on a personal visit. I told him about our fabulous trip and that there was a constituency for peace in India too. It is however true that it remains hostage to post-Mumbai rhetoric, but these challenges were not insurmountable. Mr Khan is a distinguished diplomat, and he neither contradicted me nor endorsed my comments. Nevertheless, it was a pleasure to have met such an articulate man who obviously was the right choice for important postings such as Afghanistan and India.

To sum up, trade, dialogue, an open visa policy and the smooth flow of information between the two countries will take care of historic acrimonies. In the long term for our survival as a subcontinent, we will have to agree on Kashmir, Siachen and other thorny issues. Hostility has its peculiar shelf-life, and the hate-formulae are becoming irrelevant sooner than we think.

The flight was half empty, reflecting how difficult travel between the neighbours has become over the years. Much as we might like to condemn each other, our destinies are intertwined. Such is the bittersweet truth of history, and perhaps, the hope for the future.

Raza Rumi is a writer, editor & policy expert based in Lahore – razarumigmail.com