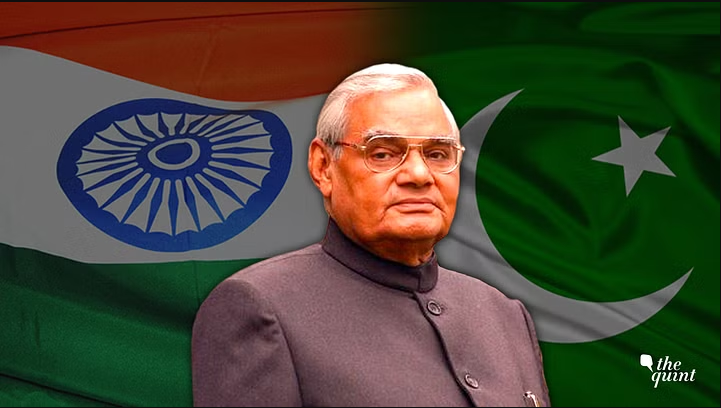 Atal Bihari Vajpayee has been viewed by Indians through all sorts of prisms. But in Pakistan, he was viewed by many as perhaps the only Indian leader serious about building bridges with their country. Much has been written about the role of political will and leadership in peace building — Vajpayee symbolised both.

His counterparts in Pakistan, first Nawaz Sharif and later General Musharraf, also displayed the same traits but faced systemic opposition at home. Even though Vajpayee could not succeed, and did not have the full support for his initiatives within Indian power structures, history will remember him as a visionary.

On Thursday, 16 August, Senator Mushahid Hussain, also a minister in Nawaz Sharif’s 1997-99 Cabinet, wrote on Twitter: ‘Passing away of India’s greatest statesman, ex- PM Atal Bihari Vajpayee, an irreparable loss as he was icon of peace who had a Nixonian vision to reach out for building bridges with Pakistan..’ Hussain added, ‘While other Indian leaders have talked of peace, but only PM Vajpayee had the vision, will & moral courage to ‘walk the talk’; he realised post 1998 Nuclear tests that Pakistan & India needed a fresh start based on new ground realities, incl[uding] paying homage at the Minar-e-Pakistan.’ 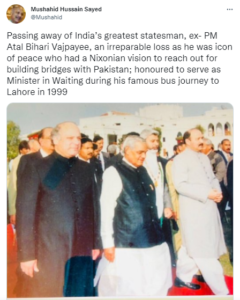 Hussain’s laudatory tweets summed up how Vajpayee was viewed by the peaceniks in Pakistan. His favourable image is ironic as the party that Vajpayee led, espouses a revisionist view of the Muslims; and party supporters, including those in senior positions, make little effort to hide their antipathy towards the followers of Islam.

Vajpayee’s emergence as a peace-builder in such a milieu was exceptional, to say the least.

This was just as dramatic as Musharraf’s transformation from the ‘architect’ of the Kargil war to being the exponent of a four-point formula to resolve the Jammu & Kashmir issue. The wheels of history are quite unpredictable in their movement.

Vajpayee had his limitations too. Trained in the fold of Hindutva, his rhetoric on Babri Masjid was inflammatory; his party cadres implemented the idea of demolition. But there were occasions on which he departed from the ‘script’.

After the 2002 Gujarat riots, he termed anti-Muslim violence as a ‘kalank ka teeka’ (a blot) on India’s forehead.

Just as he tried to reconcile competing narratives within India and tempered the intensity of Hindutva, Vajpayee’s foreign policy followed contradictory patterns. Vajpayee led India into its nuclearised state, affianced with the West especially with the United States; and meaningfully engaged with Pakistan despite the opposing voices within India that reminded him of ‘cross-border terrorism’.

Vajpayee stayed the course — for he had a vision for South Asia, and perhaps thought that he could be the ‘man of destiny’ after Nehru (whom he, unlike some of his partywallahs, did not abhor).

Vajpayee developed a special bond with Nawaz Sharif, who by the late 1990s, had figured out that his vision for economic growth and civilian supremacy within Pakistan was not achievable without making peace with India. Sharif also understood the imperatives of trade, and the role it could play both for growth and long-term security.

By now, Sharif had also grown in domestic stature – from a handpicked lackey of the Pakistan Army, he was a popular leader from the Punjab province – and his overtures were a sign of his ‘independence’. He had to pay for this in 1999 when his Army Chief ousted him in a coup, but that’s a risk he understood well. He has not budged since then. He is in jail once again, but the idea of peace remains potent enough as a threat to the established order in Pakistan.

Sharif’s bonhomie was responded in kind by Vajpayee. In 1999, he visited Pakistan on a bus – and the service continues. It was a courageous move. The high point of that historic visit was Vajpayee’s homage to the idea of Pakistan at the Lahore monument called Minar-e-Pakistan. Vajpayee wrote in the visitor’s book: “Strong and stable Pakistan is in India’s best interest,” and as a true statesman, wished the ‘enemy’ the best of luck.

The symbolism of visiting Minar-e-Pakistan was a departure from the long-held Indian nationalist viewpoint that Pakistan was an ‘aberration’, an unnatural state, or worse — a conspiracy by the British colonists. Vajpayee could do that because he was free of the baggage that Congress leaders carried on their sleeves.

Sharif-Vajpayee signed the Lahore Declaration that could have altered the future of India and Pakistan.

But the Kargil war during the summer of 1999 reversed the peace process. Goodwill turned into acrimony, war casualties and media blitzkrieg (now a norm). The media industries in two countries are now active participants in imagined warfare as they ‘sell’ war in addition to soaps, hysterical debates and half-truths for ratings.

Yet, Vajpayee was undeterred.

Despite the bitterness of Kargil, he invited General Musharraf to Agra, and the two sides once again came close to some kind of an understanding.

Reportedly, Vajpayee could not seek the kind of support from his party and other players to achieve a concrete compact. Later, he visited Islamabad to attend the SAARC conference.

In the meantime, he had also addressed the Kashmiris as ‘real’ people instead of constituents of a ‘nation-state.’

Vajpayee had to step down in 2004 when the Congress won the election, but his legacy was formidable. His successor Dr Manmohan Singh, had a template to work with, and once again, parleys between India and Pakistan came close to a settlement. The latter could not be actualised due to domestic politics in both countries.

Modi can pay no better tribute to Vajpayee than to espouse his vision and carry forward the task that Vajpayee set for 21st century India.

This ‘task’ is also expressed in poetic terms during Vajpayee’s 1999 visit to Lahore:

Published in THE QUINT – August 18, 2018: Vajpayee Was a Bridge Between Our Countries: A Pakistani’s Elegy