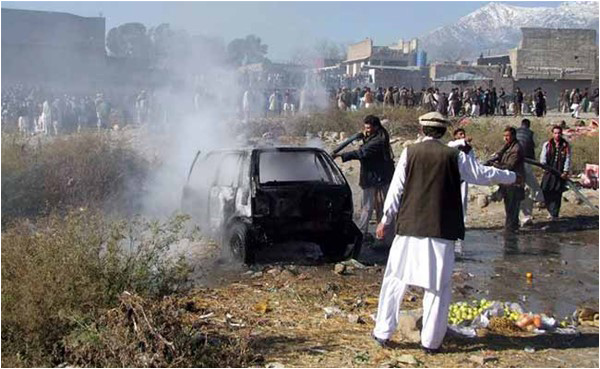 For more than two years, Pakistanis have been assured that terrorists have been defeated. The government, including its military branch, has been touting the National Action Plan (NAP) as the country’s counterterrorism policy framework, claiming that it was being implemented on track. But while the country’s overall security has improved considerably, Pakistan is far from ‘defeating’ terrorism or tackling the ideological drivers of extremism that fuel this violence by turning scores of young men into those who attack their own compatriots.

In one such instance, on January 21, a terrorist attack in Parachinar caused 25 deaths and injured 87 people. The Tehreek-e-Taliban Pakistan (TTP) claimed responsibility, saying that it was exacting revenge for the killing of Asif Chotu, a leader of the sectarian militia Lashkar-e-Jhangvi (LeJ). He was killed in an encounter on January 18 in Sheikhupura, Punjab. Most of the victims in the TTP Parachinar attack were Shia, and it is intriguing that the TTP believes that killing civilian Shias serves as retribution for the State’s action against the LeJ.

The Parachinar attack is just another attack in what has been an offensive that the militants have launched over the last two years. It is not an isolated incident. It is just that a hyperactive media campaign of the military’s public relations wing has successfully deflected attention from terror incidents by citing the successes of operation Zarb-e-Azb and invoking the ‘foreign hand’ theory. Such was the control of media discourse that fair, impartial critical analyses of NAP or assessments of the kinetic action taken by the military were swiftly labelled unpatriotic acts, leaving little room for debate and reflection. On the other hand, any shortcomings of NAP’s implementation were laid at the door of the civilian government.

The spell was broken, however, within days of the retirement of the army chief. A heavyweight critique of NAP came from the judicial arm of the state in the shape of the Quetta Inquiry Commission report. A Supreme Court judge had been tasked with investigating the eviscerating attacks on lawyers in Quetta on August 8, 2016 which left more than 70 of them, indeed an entire generation, dead. The report submitted by the judicial commission garnered some media attention in December 2016 but it did not gain momentum. Instead, given the media’s obsession with the prime minister’s alleged corruption and the Panama leaks case hearing, public debate on NAP has nearly vanished.

The Quetta Commission report highlighted the failures of the federal and provincial governments and the law enforcement apparatus but it did not delve too much into the role and responsibility of the military that has led counterterrorism operations on the ground. NAP is not working, as different power centers within the State are not ‘on the same page’ despite their proclamations to that effect. The public statements of the former army chief and the head of the Inter-Services Public Relations testify to this reality.

Unclear leadership and management arrangements hamper institutional effectiveness. Since the Peshawar school attack in December 2014, the military has led the apex committees in the provinces. The federal government, especially the prime minister, however, did not do what was expected from them. In fact, matters took another turn when details of national security meetings were leaked, resulting in a civil-military impasse. Whether the leaks carried by DAWN newspaper were authentic or not, they reassert the differences in policy between the civilians and the military.

NAP cannot succeed in the medium to long term without changes in Pakistan’s foreign policy especially without a reconfiguration of the country’s bilateral relationships with India and Afghanistan. At least the Quetta Commission report dismissed the claims made after the killing of lawyers that external intelligence agencies (of India and Afghanistan) were involved in the attacks. The new Army chief has also reaffirmed the institutional approach to regional security. Parleys with the Afghan president have been indicative of the continuity.

Violent groups that serve our security policy interests have yet to be viewed as hazards for Pakistan. The infrastructure of extremists cannot be dismantled if some of the violent groups are glorified simply because they are not ‘anti-Pakistan’. Militant recruitment and community networks as experienced over the past three decades overlap and converge.  The rise of the TTP and the swelling of its ranks with militants testify to this reality.

But there is more to NAP than just the regional policy environment. The coordination agency, the National Counterterrorism Agency (NACTA), is nothing more than a moribund government department and that too not in the mainstream power matrix. The judicial commission noted that it has not been empowered or activated despite legislation to this effect. In fact, NACTA was moved from the Prime Minister’s Secretariat oversight and placed under the Interior Ministry, denuding its importance as well as functioning. The Quetta report also noted how little coordination existed between various tiers of government and different security agencies and the police.

Perhaps the most critical part of the Quetta commission related to the bureaucratic processes of declaring a militant organizations as “proscribed”. Despite a militant organisation claiming responsibility for perpetrating a terrorist attack, and a provincial government confirming it, NACTA sought the opinion of the intelligence agencies on whether to proscribe the organization or not. And the intelligence agencies did not respond to this request for weeks. There is no single, credible database within different various levels of government on suspects or perpetrators of terrorist acts and of various militant organizations.

Reforming state institutions, especially the criminal justice system, has been given little attention. Worse yet, experimenting with military courts yielded limited results. The two-year operation of these courts, essentially in conflict with constitutional guarantees of a fair trial and due process came to an end during January 2017. There seems to be little chance they will be continued. Sadly, the civilians, specially the provincial governments, are not interested. How could NAP succeed under such circumstances?

Let’s not even talk about the madrassa registration and regulation. The interior minister does not find hate speech by sectarian militias an expression of extremism. The Anti-Terrorism Act, as the Quetta commission reminded, is applicable to government officials too. Therefore, the continued, brazen contacts of security services and ministers with the leaders of proscribed organizations just goes to show why “NAP” has turned into a bad, public joke.