An affair with Sufiana art in Ajmer 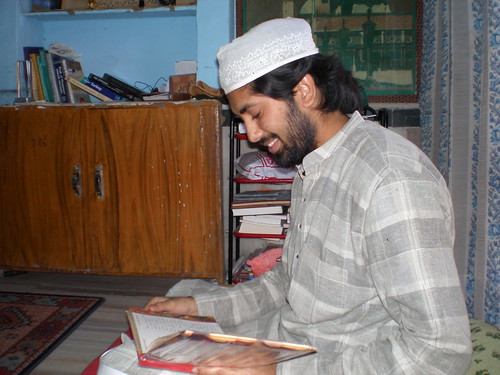 My dear friend Salman Chishty is holding an exhibition at the death anniversary (Urs=Union) celebrations of Khawaja Muinuddin Chishty. This is such an innovative tribute to the great Chishty saint. I recall seeing some of these works that he was collecting in Ajmer earlier this year.

AJMER: The Sufi message of peace and harmony is being propagated through an exhibition of paintings called ‘Sufi art exhibition’ organized by Salman Chishti, a Sufi Scholar and a curator of art paintings.

He is displaying his collection of 100 paintings on handmade khadi paper at the Chishti Manzil here. The theme of exhibition revolves around calligraphy and paintings depicting Sufi values. 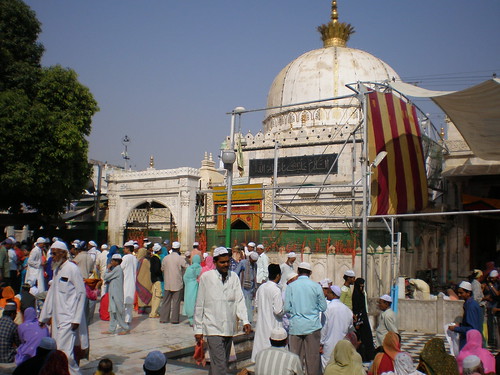 At the exhibition, the Sufi paintings of Najmul Hasan Chishti, a khadim of the Khwaja and a calligraphy artist. The unique feature of this exhibition is the representation of the saying of Sufis in calligraphy, along with its meaning illustrated through a painting in the background.

The principal essence of Najmul’s works is portraying life in ‘Sufi Islam’ and especially on ‘Sama, a form of mediation, widely practiced by the Sufi ‘dervish’. One can observe Rumi poetry in many of his paintings. He had beautifully portrayed the whirling ‘dervishes’ in ecstasy.

The most prominent painting of an artist has been named ‘Vajd’, the meditating ‘dervish’, this painting captivates the mood of a ‘dervish’, swathed in a multi-coloured clock, although their eyes are open by their gaze, it is directed inward away from the world.

Another painting which is receiving appreciation is depiction of ‘Basant’ on the verses of Amir Khusrau, the famous Sufi poet of thirteenth century. The painting portrays ‘dervishes’ traveling to the shrine on Basant clad to offer garlands of yellow flowers while singing Qawwalis.
The paintings appear to be miniatures at first sight, but a closer look reveals the artist’s beautiful use of watercolors.
Artist Najmul began his affair with brush and paint years back when he was a student of fine arts. His deep love and faith in Sufi values helps him in coming up with ideas.

Salman, the organizer of the exhibition, have successfully created a Sufi ambiance at the venue of exhibition. The art lovers can be seen lost in themselves, when they encountered with the aroma of scented incense and in a background the Turkish Sufi music takes them on a ride to a another world.
“The objective of this exhibition is to encourage the dying art of calligraphy as well as to revive the tenets of Sufism, that preaches universal brotherhood,” said Salman.

The exhibition, which was inaugurated on Saturday morning and will continue till July 14, is attracting a lot of attention from the devotees coming to the dargah to participate in the 796th annual Urs.

Apparently exhilarated by the paintings, Fahim Hussain from Mumbai said, “It’s a soothing experience, which will take you to a different world.”
8 Jul 2008, 0636 hrs IST, Shoeb Khan,TNN

Next Post
A brush with the new – Asim Butt’s Art

A shorter version of this article was published in DAWN in January 2017. Pakistani American

259 thoughts on “An affair with Sufiana art in Ajmer”