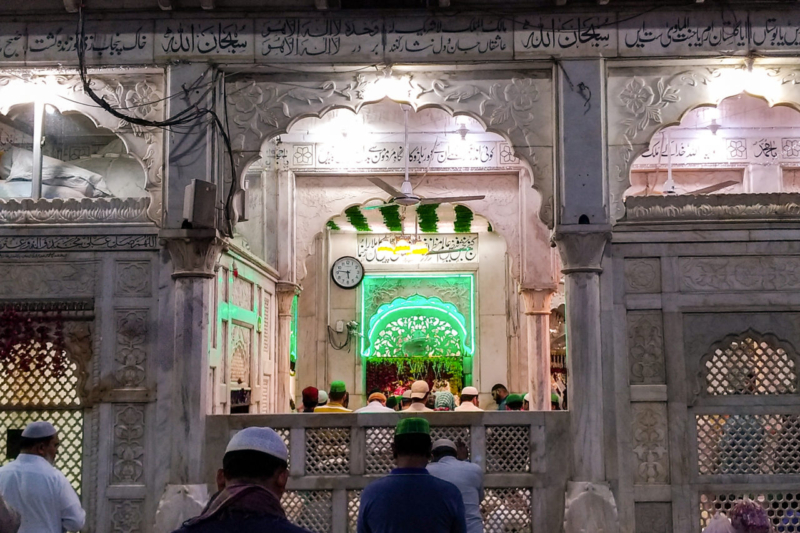 Perhaps the greatest of the experiences at Data Darbar is to find oneself connected to a stream of humanity, shoulder to shoulder, with a shared sense of spirituality that cuts across ethnicity, sect, ritual and even religion at times. Despite the mayhem, the serenity of the place is soothing

Last week, accompanying a visitor from the Mecca of Sufis, Delhi, I reconnected with the Data Darbar or the royal pavilion of the great saint of Lahore, Ali bin Usman Al Hajveri. This shrine is the oldest and perhaps the most vibrant cultural marker of the past one millennium in Lahore. The title of Ganj Bakhsh was bestowed by the saint of the saints Khwaja Moin ud din Chishti of Ajmere, whose ascendancy in the Chishtia Sufi order is recognised by all and sundry. Pilgrimage to Ajmere by itself is a matter of spiritual attainment for the majority of Muslims in the subcontinent. It is not difficult to imagine then what the stature of Lahore’s Data Darbar is in this esoteric yet real and lived Islam in South Asia. While Khwaja Moin ud din Chishti honoured the Lahori saint with the title bestower of treasure, ordinary folk on Lahore’s streets were more direct by naming the saint as Data, the one who facilitates the fulfilment of aspirations. 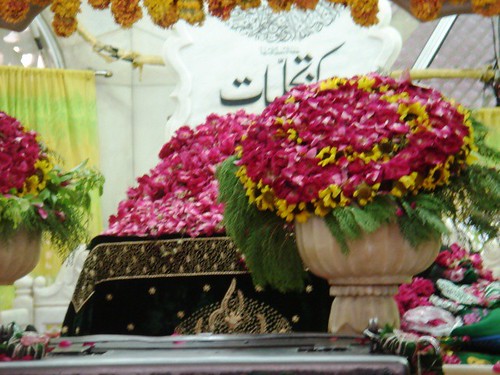 Living nearly 11 centuries ago, Syed Ali bin Usman Al Hajveri was not a Lahori but a resident of Lahore’s cultural step-cousin, Ghazni, until he arrived in India and wandered in northern India before settling in Lahore for the last 34 years of his life. This was the time when mystics from Central Asia, in their constant urge to discover new vistas of spiritual exploration, started to travel and settle in different parts of the Indian subcontinent. It remains a mystery as to why Data Ganj Bakhsh would have chosen Lahore as the final stop in his life long journey. Perhaps the secular interpretation could be that Lahore was an inevitable stop over for all the Central Asian and Turkic caravans and armies and provided the right kind of environment for a foreign mystic to amalgamate into. A little before Ganj Bakhsh’s arrival, Lahore had been resurrected from the earlier ravages of time by the Ghaznavid ruler Mahmood and his son Masood.

Lahore’s fame had also spread deep into the rugged, mountainous climes of Central Asia. Its old fortified city, the banks of a gushing river and the motley collection of artisans, masons, artists, poets and musicians were all too well known. 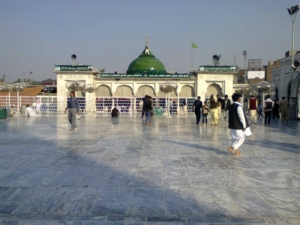 During the 34 years of his Lahore residence, Ali Hajveri became the most revered of dervishes whose inclusive and tolerant mystical path attracted the majority of its non-Muslim population. Let us not forget that the non-Muslim population was also a subject of a pernicious caste hierarchy where access to templar gods and clerical blessings was denied to a good number of the population. This was the beginning of a centuries long process of peaceful conversions. Islam’s egalitarianism and its larger message of equality before God was quite a magical idea for many, not to mention that the Sufi path did not require conversion per se. This is why Data Darbar has been a hub of inter-communal quests for spiritual attainment.

Other than that, Ali Hajveri’s important contribution to the corpus of documented mystical thought is the treatise that he authored and left for posterity. Known as Kashf- al- Mahjub, or Unveiling of the Hidden, it is a monumental document striking for its communicative tone and systematic way of discussing mysticism.

Through the dynasties that were to follow Mahmood Ghaznavi’s controversial military campaigns, the primacy of Ali Hajveri’s shrine continued. Its centrality to the evolution of Muslim rulers meant that the origins of Islam were paradoxically not rooted in the capture of power. Voluntary conversions at Sufi khanqahs and dergahs were a constant process. The Sultans of Delhi and the Moghuls were all enamoured by the mythical might of the saint, and while the imperial grandeur continued, the ordinary Lahoris had already renamed Lahore as Data ki Nagri- Data‘s city. Khawaja Moin ud din Chishti undertook 40 day long meditative exercises at this shrine before he moved to Ajmere to carry on the Sufi mission of spreading love, tolerance and harmony and of re-emphasising the indivisible equality of man. The Moghul prince and heir apparent Dara Shikoh, like his great-grandfather Akbar, was also a true devotee of Data Ganj Bakhsh.

The decline of the Moghul Empire did not impact the energy of the shrine. In fact, the formidable Punjabi leader, Maharaja Ranjit Singh, like his predecessors, invested in the upkeep and expansion of the shrine complex. The rulers dare not afford the wrath or displeasure of the saint, such has been the power of imagination. Therefore, it is but logical that Mian Shahbaz Sharif, during his first tenure as the chief minister of Punjab, initiated the mega project of Data Darbar‘s physical renewal, expansion and beautification in the late nineties.

My visit on that Thursday night took me by surprise at the melee of the devotees. This was the first time that I actually experienced the chaotic enthusiasm of the thousands that had gathered on just a regular Thursday night. We entered as a matter of caution from the old Mela Ram street and walked to the shrine passing through the interesting web of narrow streets and by lanes with courtyards boasting a few ancient pipal trees. This was not an easy walk given the jam-packed streets around the shrine. We tried to enter the shrine by the golden gate erected by Zulfiqar Ali Bhutto in 1974 and after a little argument with the hordes of volunteers razakars as they are called to maintain order we reached the all-marble inner precincts of the shrine. 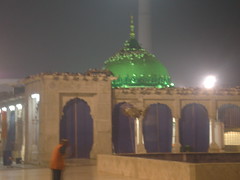 Standing near the tomb is a fabulous experience, for it brings together the innate diversity of our cultures and faiths. From the absorbed mystics, the mazjoobs, to the green turbaned formal clerics, there are dozens of interesting followers all in the same compound. If at one end a naat khwan is reciting verse eulogising Prophet Mohammad (PBUH), at the other end one would find another person reciting some Punjabi folk tale in lyricised format. Sounds of zikr – organised remembrance of God – sessions are in progress, and not too far away a little group would be offering prayer in a more ritualistic manner.

Men and women access the tomb from different sides and mercifully women are not denied entry unlike a few other shrines in India and Pakistan. Over the years, many verses in Persian have been engraved in white marble either as part of a government project or through individual philanthropic contributions. The most famous of these happens to be Moin ud din Chishti’s famous verse:

(Ganj Baksh is a manifestation of divine light and a bounty for all
For the lesser mortals he is the perfect guide and for the perfect, he is the leader)

There is a little hamam that is believed to be an old source of water at the shrine and contains healing powers. Little trays full of salt are also to be found here and these are meant to be tasted by visitors for medicinal and spiritual benefaction.

In Kashf al Mahjoob, Ali Hajveri writes on the essence of Sufism that places loving devotion of God at its core: Sufism is the heart’s being, pure from the pollution of discord. He further elaborates that, love is concord and the lover has but one duty in the world, namely to keep the commandment of the beloved and if the object of desire is one how can discord arise? And if one is striving to keep the heart free of discord and clear in the pursuit of the single most important priority, i.e., love for the creator, then love for all creation is but a natural consequence.

About the Sufi attire of the patched frock, Ali Hajveri has a creative mystical interpretation to offer: its collar is annihilation of intercourse (with men), its two sleeves are observance and continence, its two gussets are poverty and purity, its belt is persistence in contemplation, its hem is tranquillity in (God’s) presence and its fringe is settlement in the abode of union. This translation by Nicholson may not do justice to the original Persian prose but it does covey to us the richness of metaphor and the light of imagination that can only emanate from the purest of hearts.

Langar, the distribution of food, at the Sufi Khanqah (abode) is a centuries-old tradition. It allows devotees to eat together, feed the hungry and attend to an exhausted traveler and is a means of redistributing wealth. Data Darbar is also an important location, for it feeds thousands of people every day through the complex networks of langar, its financiers, distributors and organisers.

Perhaps the greatest of the experiences at Data Darbar is to find oneself connected to a stream of humanity, shoulder to shoulder, with a shared sense of spirituality that cuts across ethnicity, sect, ritual and even religion at times. The serenity of the place despite the mayhem is also soothing. On less busy days, the interaction with the shrine becomes even more comforting.

In years that I have not visited Ganj-Baksh’s tomb, I have remained connected. It has little to do with the search for miracles and seeking petty, transient favours from divinity and God’s chosen few. It has to do with the pursuit of the purity, of an unpolluted being, free of discord. This uncanny feeling has been best defined in the words of the great saint:

To traverse distance is child’s play: henceforth pay visits by means of thought; it is not worth while to visit any person, and there is no virtue in bodily presence.

Whether one visits Data Darbar or not while living in Lahore, it is not difficult to be connected. Lahore’s last millennium and its spiritual-cultural centerpiece Data‘s shrine characterises us, whether we recognise it, or not.

First published in the Friday Times