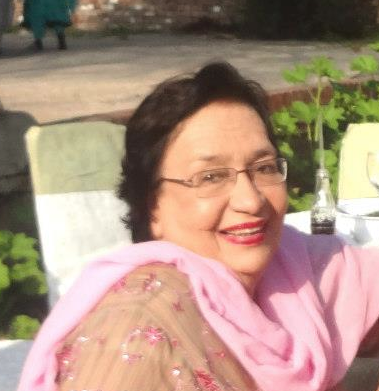 “Death, a necessary end, will come when it will come…”

Salma Mahmud, or SM as we called her at TFT, quietly left us last week. I can imagine her, part-disdain and part-panic when death would have walked up to her, announcing that it was time to change her residence. She was not unfamiliar with change or moving around as her life journey was always full of surprises, drama and anguish.

Salma ji was the eldest daughter of MD Taseer, the great poet-intellectual of early 20th century Punjab, and older sister of the brave and unforgettable Salmaan Taseer. Our acquaintance began as colleagues at TFT when SM was working as an assiduous and creative editor. We would correspond half a dozen times a day, and then we started to talk regularly, even when there was no work to discuss. SM was awfully funny and irreverent, and had great taste in literature. It is a separate matter that she also loved reading what she herself called “trashy novels”. I would encourage her to review them for TFT, as I found the idea most exciting that a woman who had read everything under the sun could take a break and enjoy racy and “fun” books.

Her husband Mahmud Sahab was a great companion of hers, a man infinitely proud of his learned wife and fully involved in her writing.

SM was born in Kashmir when Dr. Taseer had started his career as an educationist. In an interview she told me: “My father was the essence of love and affection. I can’t recall any cross words, except just once towards the end of his life, when he was an ill person, and he apologised to me afterwards. He lavished lovely presents on us, especially books, which he bought all the time. Beautiful Japanese art books, for example, as well as the usual classics and Enid Blyton. Wonderful dolls came for us from FAO Schwartz, the legendary toy shop, when he visited New York in 1948.” The 1940s were a turbulent as well as a deeply enriching decade for SM as she imbibed the literary milieu in which her father was a shining light. At the same time she also discovered the existential and social “aloneness” of her father despite his stature as a poet.

Dr. Taseer took a Pak-nationalist line after 1947 which isolated him from some of his “progressive” writer friends. One cannot for long begrudge men of letters for the political choices they make. SM carried her childhood and all the great cities she lived in with her wherever she went. Her memories of Dehli, Simla, Srinagar and Lahore became the lens with which she viewed the world, art and beauty. Lutyens’ Dehli and the Lodhi road bungalow, where she attended dinners held for luminaries such as EM Forster defined for her the idyll of life. But the Partition and its tragic aftermath changed her life.

By 1950, MD Taseer was dead, leaving lots of ideas and poetry but little inheritance for the family. SM’s English mother Christabel (sister of Alys Faiz) took it upon herself to raise her children and provide them with all they needed. SM studied at the Kinnaird College before pursuing a Masters degree at the University of Edinburgh. Like her father, SM turned into a seasoned teacher of the English language and literature and taught in the Gulf and Pakistan in various institutions. Till her last she was dedicated to education and was affiliated with the Beaconhouse National University.

SM moved to Lahore a couple of years ago when the couple found vocation in Lahore. They chose to live a little away from the town. She was not keeping well physically but was agile mentally with her trademark razor-sharp wit. Earlier I had persuaded her that her outstanding series for TFT – All My Uncles – ought to be made into a book. SM resisted initially but then got excited like a young writer; and I am privileged to have helped her arrange the material and look at the various drafts. Salma Mahmud’s ‘The Wings of Time’ is a delightful compendium of fine writing and encapsulates an era that seems magical in these times of right-wing ascendancy and religious violence. This was SM’s tribute to her father in a roundabout way as she remembered all his friends (her “Uncles”) in a loving manner. Iqbal, Faiz, Sufi Ghulam Mustafa Tabassum, EM Forster, Victor Kiernan appear as real men, ghosts and parchments of a world that SM saw slip away.

I remember she was pleased with my review of the book for TFT and my humble attempt to get the book widely noted. In fact she complimented me more than I deserved.

SM and her gregarious spouse would take me out for lavish meals. From big desi meals at Lahore’s branch of BBQ Tonight to a posh MM Alam Road restaurant, I was often a Sunday lunch guest. But I was touched always when the couple would call me their son. SM would laugh heartily – showering affection in a sort of British way and also making fun of the “adopted son” status. She would tease me and call me names when I would be travelling. I was given all sorts of names, from Ibn e Batuta to others that I can’t mention here. I will miss that laughter too.

In these last few months I had convinced SM to speed up her second book and promised to introduce her to a literary agent. The last we spoke was when she called frantically to check whether Raja Porus of Alexander fame could be labeled a ‘Hindu’. I gave her an elaborate spiel on the colonial construction of the terms ‘Hindu’ and ‘Hinduism’. Half way she interjected and said: “Give me a straight answer you mischief maker.” We had a string of jokes and names for many a common acquaintance and would invoke them every time for a good laugh.

In an interview, SM had complained: “As far as the younger generation’s reading habits are concerned, all I can say is that they are in a sorry state, and nobody can acquire mastery of a language, be it Urdu or English, without reading its literature, especially its poetry. Matters should be put on crisis footage and serious work should be undertaken to remedy this dire situation.” She always lamented how Pakistanis were moving away from knowledge and books. At the same time, SM had integrated herself into the 21st century by avidly following blogs and using the Internet with abandon. She would check my postings on the web and react via a sharp phone call.

As an editor she was meticulous and expected to be edited carefully too. TFT’s young editors were scared to touch her work as once she jokingly warned an intern of a bloodbath if her copy was tampered with unnecessarily. Those were fun times, and if I were to compile all her emails, it would read like the diary of a witty, eccentric and hard-line-taking editor. I have no hesitation in saying that I learned a lot from SM about the intricacies of the English language. I owe her much and am deeply saddened that she is not here anymore.

I remember seeing her as a shattered sister at Salmaan Taseer’s funeral. She remained silent for days. Taseer’s murder was the terrible and bitter finale of the world she had known her whole life. Being half-British, she couldn’t express her grief the way others in our society do, but I think she was profoundly affected by this ghastly tragedy; and after it her health was never the same.

I know that SM’s voice will never echo again in my phone; and the Sunday food-fests won’t be the same without her. But her words of comfort and advice will travel with me wherever I go.