Lahore Nama – A new blogspace devoted to the magical city 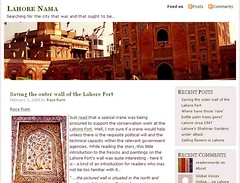 I have been rather casually posting news, stories and comments on Lahore’s heritage and its current status on Lahore Nama. While blogging here I was always tempted to write about Lahore or post stuff by others on my beloved city. Noting that this would be rather obsessive, I have created an outlet for this obsession and a new blog is now on the block, as they say.

What differentiates Lahore Nama from other Lahore-centred blogs? Indeed, it is no way near the excellent Lahore metblog that is managed by a good team of motivated bloggers. My focus is on Lahore’s past and viewing the present in relation to that.

Luckily, Darwaish in Lahore has sent me some brilliant pieces and Ahmad Rafay Alam has agreed to the use of his incisive articles on urban planning; and Mayank Austen Soofi has also been contributing stories for cross-posting. In fact Soofi was most kind to announce the birth of Lahore Nama on The Delhi Walla. I quote from that story:

More than 60 years have passed since the creation of our two nations. 60 years should be but a blip in the life of great cities like Delhi and Lahore but meantime much has changed in their characters. And character is destiny. Both cities have continued to grow in ways that makes them very different from each other. Delhi lost its Muslim refinement. Lahore lost its Hindu heritage. Today there are three cities of Delhi and three cities of Lahore: what they used to be; what they are now; what they could have been.

So Lahore Nama is on the blog-horizon and without much effort on my part it is attracting a few hundred visitors each day.

Such is the pull of Lahore….