Source here and here
Shahbaz Qalandar was born in Marwand to a dervish, Syed Ibrahim Kabiruddin whose ancestors migrated from Iraq and settled down in Mashhad, a center of learning and civilization, before migrating again to Marwand. 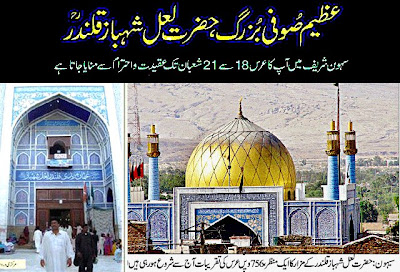 His dedication to the knowledge of various religious disciplines enabled him to eventually become a profound scholar. During his lifetime, he witnessed the Ghznavid and Ghurids rules in South Asia. He became fluent in many languages including Persian, Turkish, Arabic, Sindhi and Sanskrit. His mysticism attracted people from all religions. He was titled Lal (red) for his usual red attire, Shahbaz due to his noble and divine spirit, and â€˜Qalandarâ€™ for his sufism and saintly attitude. Hindus regarded him as the incarnation of Bhrithari.
He is also known affectionately as Jhulelal

(I was utterly abashed by this word of the Qalandar: â€˜If you bow down before an alien, you will not only be physical whackled but also be deprived of your mind and soul)
His annual Urs (death anniversary celebration) is held on the 18 Sha’aban – the eighth month of the Muslim lunar calendar. Thousands of devotees flock to the tomb while every Thursday their number stands multiplied especially at the time of his â€˜Ursâ€™ being a carnival as well a religious festival and celebrated every year. Sehwan springs to life and becomes the focal point of more than half a million pilgrims from all over Pakistan. On each morning of the three day feast, the narrow lanes of Sewhan are packed to capacity as thousands and thousands of pilgrims, fakirs and devotees make their way to the shrine to commune with the saint, offer their tributes and make a wish. Most of the people present garlands and a green chadar (a cloth used to cover a tomb) with Qurâ€™anic inscriptions in silver or gold threads. Humming of verses, singing and dancing in praise of the saint continues till late at night. A devotional dance known as â€˜dhamalâ€™, being a frenzied and ecstatic swirl of the head and body, is a special ritual that is performed at the rhythmic beat of the [dhol] (a big barrel-shaped drum), some of them being of giant size and placed in the courtyard of the shrine. Bells, gongs, cymbals and horns make a thunderous din, and the dervishes, clad in long robes, beads, bracelets and colored head-bands whirl faster and faster in a hypnotic trance, until with a final deafening scream they run wildly through the doors of the shrine to the courtyard beyond.
Legends and Stories
On his way from Baluchistan to Sindh, he also stayed in present day Karachi’s Manghopir area for muraqba (meditation), and it is said that Manghopir’s natural warm fountain is a miracle of Lal Shahbaz Qalandar. That warm fountain started to flow from beneath the hill, on which Lal Shahbaz sat for muraqba (meditation). After passing hundreds of years, that warm fountain is still flowing continuously and is said to have miraculous healing power especially for asthma patients.
In Multan, Lal Shahbaz met Bahauddin Zachariah Multani of the Suhurwardiya order, Baba Farid Ganjshakar of Chishtiya order, and Makhdoom Jahanian Surkh Bukhari. The attachment was so cordial and spiritual that their friendship became legendary. They were known as Chahar Yar (Persian = four friends). According to some historians, the four friends visited various parts of Sindh and Punjab, in present day Pakistan.
Almost all the saints of Sindh including Shah Abdul Latif Bhitai, Makhdoom Bilawal, Sachal Sarmast and Qadir Bukhsh Bedal were devout followers of Lal Shahbaz Qalandar.,,,,
It is also believed that he turned into a falcon to pick up his friend Shaikh Farid Shakar Ganj from the gallows. The legend goes that the incumbent fakirs in Sewhan sent him a bowl of milk filled to the brim indicating that there was no room for anything more. But surprisingly, he returned the bowl with a beautiful flower floating on the top. This legend spread far and wide by the time of his death in 1274, after living a good span for 97 years
http://www.storyofpakistan.com/contribute.asp?artid=c066