I loved Fawad’s post “A Divine Musical Collaboration – Noor Jehan & Khurshid Anwar” and here it is: 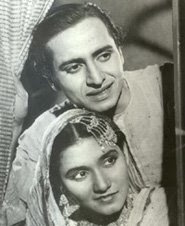 In the wake of Khalid Hasan’s death, the great Pakistani songstress Noor Jehan (Wikipedia) has been much on my mind. Khalid Hasan was a great admirer of the late Madam and wrote a much quoted tribute essay on Noor Jehan. Perhaps more importantly he translated Saadat Hasan Manto’s great portrait of Noor Jehan’s early years as a rising diva in pre-partition Bombay under the title “Nur Jehan: One in a Million” (unfortunately this link is to a scan of the essay and hard to read but the essay is included in the collection “Stars from Another Sky”). “Stars from Another Sky” includes other translations of Manto’s brilliant Urdu sketches published in “Ganjay Farishtay” and “Loudspeaker” on film industry icons like Ashok Kumar, Nargis, Naseem Bano (Dilip Kumar’s wife, Saira Bano’s mother) and Shyam. 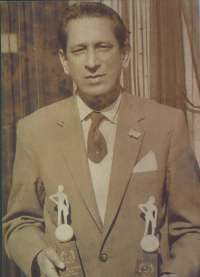 I have been listening to many of Noor Jehan’s great songs from the 1950’s. Listening to this music when she was at the pinnacle of her singing powers is a magical experience but one thing stands out. She was at her greatest when teamed up with that other giant of Pakistani film music: the virtuosic scholar composer Khawaja Khurshid Anwar. After he moved to Lahore in 1955, his music in films like Mirza SahibaaN” (1955), “Intezaar” (1956), Zehr-e-Ishq (1958), “Koel” (1959) and as late as 1970 in “Heer Ranjha” provided the perfect platform to showcase Noor Jehan’s vocal talent. Khawaja Khurshid Anwar needs a separate blog post all his own but one of my treasured possessions is the recordings he arranged in Pakistan under the title “GharanoN ki Gayaki” to help capture and preserve the various styles of classical singing of several of the “Hindustani” schools of gayaki.

Now for my choice of the brilliant collaboration between Khurshid Anwar and Noor Jehan. Here is the song “Tere Bina Suni Suni Lage Re, Chaandni Raat” from the film “Koel”. I love listening to this over and over again much to the chagrin of my family.

Bottom Photo: Khawaja Khurshid Anwar in 1957 holding the President’s Award for Best Story and Best Music for the film “Intezaar”