Today, Jahane Rumi is publishing a guest post by Ali Eteraz who is well known in the blogopshere.Eteraz is a gifted, fiery writer based in the US. He maintains a blog Eteraz, writes for the Huffington Post as well as for the Guardians blog. Ali also manages a web portal called Plural Politics. The views expressed below are solely those of the author.

Why is NYT’s India Editorial About Pakistan?

On August 15, 2007, presumably to mark India’s 60th birthday, the NYT published an op-ed by Ramachandra Guha, entitled “India’s Internal Partition.” At the outset it appeared to be a promising examination of Hindu-Muslim relations, in India. Guha started by discussing1990:

Yet moving on from that passage the reader is not treated to any meaningful discussion about India’s “internal” matters whatsoever. In fact, as soon as the discussion about Indian-Muslims begins, Guha starts to discuss…Pakistan. It is depressing that 60 years on, a prominent Indian intellectual still has not managed to learn the simple fact that Indian Muslims are Indian and Pakistani Muslims are Pakistani (and not Indian). However, what makes Guha’s gaffe even more disappointing is that his views of Muslims, Indian and Pakistan both, are downright racist.

Though he is quick to invoke his friendship with Pakistani Tariq Banuri who was the first Muslim Guha ever became “close” with (even having dreams about Banuri during the Ayodha crisis), it would appear that the friendship did not leave any discernible positive residue. 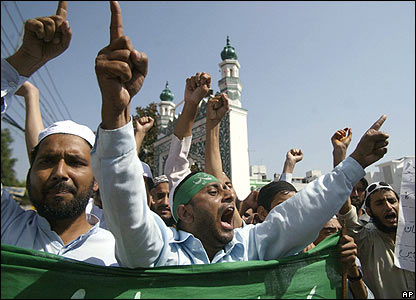 When discussing Muslims in India, Guha simply states the oft-invoked trope that Muslims don’t do anything but films, saying “but in law, medicine, business and the upper echelons of public service, Hindus dominated.” An objective editorial about India’s “internal” partition might have inquired why Muslims in India do not make it to the “upper-echelons” of Indian society. But why would Mr. Guha waste time with trivialities, when, on the 60th anniversary of India, there is plenty of Pakistan bashing to be had. It comes soon enough.
The first episode discusses his Delhi’s landlords “all refugees from the Pakistani part of Punjab.” (emphasis added). Guha describes these individuals in excruciatingly materialist terms, making them appear greedy and crass, apparently they “hoarded diamonds and maintained Swiss bank accounts.” Then, to follow it up, he adds this wonderful nugget:

They also cheated their tenants. In six years in Delhi, my wife and I had four landlords, all refugees from the Pakistani part of Punjab. All four hooked their appliances to our electricity meter, and all kept our deposits when we left.

My question is very simple. If Guha’s article is evaluating India’s internal health, and he wishes to complain about Delhi’s landlords, why is there a need to invoke “the Pakistani part of Punjab.” After all, before 1947, there wasn’t even such a thing as a Pakistani Punjab to speak about! If these people are refugees who didn’t make it into Pakistan, then they aren’t really Pakistani to start with, are they? They are Indian, aren’t they? Yet that is the sinister racism of Guha’s piece. Veiled under his concern for India, he is lashing out against a) against Muslims, and b) rendering them all in some way connected to Pakistan.
This piece of subtle-racism continues in the next section when he discusses a visit to Badshahi Masjid:

Then I went across to the majestic Badshahi Mosque, built by the Mughal emperor Aurangzeb. It was Friday evening, and a large crowd of worshipers was coming out after the weekly prayers. Walking against the flow, I had to jostle my way through.

As I bumped into one worshiper, I was seized by panic. In one pocket of my kurta lay my wallet; in the other, an exquisite little statue of the Hindu god Ganesh, dancing. I am not a believer, but this was my mascot, a gift from my sister, carried whenever I was separated from my wife and little children. What if it now fell out and was seized upon by the crowd? How would that turn out Ã¢â‚¬â€ an infidel discovered in a Muslim shrine, an Indian visitor illegally in Lahore?

See the use of the terms “infidel” and “panic” and “seized upon by the crowd” (as if all Muslims crowd act as one), and the use of the term “shrine” to describe a mosque? Reality is that Guha is unwilling to accept that when he was in Pakistan, no one cared that he was a Hindu, or had a dancing god in his pocket, or that he was from the upper-echelons of Indian society. In India, by virtue of being Hindu, he’d at least have been able to feel better than Indian-Muslims. In Pakistan, deprived of recognition, and in desperate need for it, he resorted to a simpleton’s victimization-complex.
After all this racism, it is no surprise that he ends by predicting war between India and Pakistan.

Despite their shared culture, cuisine and love for the game of cricket, India and Pakistan have already fought four wars. And judging by the number of troops on their borders and the missiles and nuclear weapons to back them, they seem prepared to fight a fifth.

There is no mention of the peace-initiatives via Musharraf and cricket-diplomacy over the last seven years (during which time Indian visitors were celebrated by Karachites and Lahoris), or that for the first time in ages there hasn’t been any saber-rattling between India and Pakistan. Guha’s anti-Muslim attitude, in which all Muslims, even Indians, really are Pakistanis, leads to enmity between Hindu and Muslim. If anything, this editorial, entitled “India’s Internal Partition” reveals more about why Pakistan was necessary, and a good idea, than casting any positive impression of India.