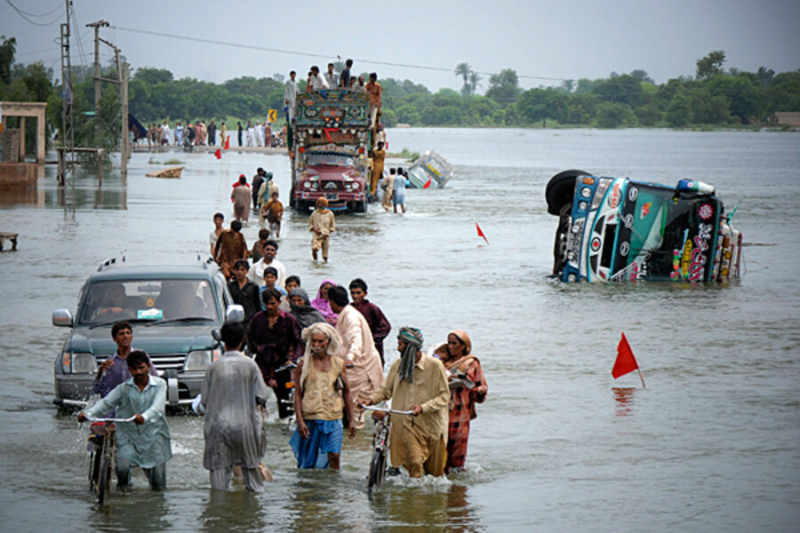 Pakistan’s recent disaster has exposed the long standing crisis of statehood. It would be a clichè to state that even the best prepared country would have been swamped by the scale of the floods. However, the flood also exposed our failing state and never before have we witnessed such radical damage wreaked on the governance institutions in the country.

Beyond the early recovery phase: The enormity of the humanitarian crisis requires concerted planning and a seamless transition into the rehabilitation and reconstruction phase. A key reason for the skepticism of citizens and the international community relates to the obvious challenges of governing Pakistan and ensuring that the state delivers on its inherent mandates. Humanitarian assistance has been forthcoming and the pundits’ ‘credibility-deficit’ argument has been trashed by the world as it made pledges of over 600 million dollars. However, resources for the post-relief phase are uncertain. The usual recipe of the international economic order through IFI loans seems to be the only solution in sight unless the world wakes up to the potential long term consequences of this disaster and finds other ways than to increase its debt.

Financing challenges: A bigger challenge that faces Pakistan’s crumbling governance is related to financing the disaster-management. Already, competition between the Pakistani state agencies and the United Nations system seems to be apparent. The intentions of the UN notwithstanding, its inefficiencies (such as high administration costs) are all too well known. Similarly, the funding tensions between the federal and provincial governments will also come to light as and when assistance arrives. The criteria are unclear – Punjab wants it according to the damage while the smaller provinces are already talking about the state of ‘relative devastation’ and losses. This is something that the national council of common interest will have to resolve, lest it creates more fissures and becomes another pretext for an extra constitutional upheaval.

Collapsed local governance: The collapse of civilian state machinery has been the post-flood script transmitted through the electronic media in the public sphere. South Asia’s local state has been defined by centuries of land administration and governance structures that were built upon by the British in the 18th and 19th centuries. The Raj steel frame in Pakistan underwent various shifts but these were ad hoc and not driven by an agenda for social change. Other than Bhutto’s reforms in 1970s, General Musharraf’s demolition of district administration across the country in 2001 will remain a watershed in our history. The new devolution plan was politically contested and suffered from a crisis of legitimacy, and therefore its demise in 2008, was a natural outcome. However, the elected governments, too busy in consolidating their power fiefdoms at the provincial levels, failed to replace the 2001 system, thereby accelerating a vacuum at the local levels. Since early 2010, administrators have been running the show in districts and sub-districts and the lowest tier, i.e. the Union Council has been virtually dysfunctional due to lack of capacities and resources.

The manner in which the centralised institutions such as the National Disaster Management Authority (NDMA) were unable to respond, or even set up a genuine camp for the chief executive of the country, reflect on how governance in this country has become an all-embracing morass. Similarly, the provincial irrigation departments which had practiced the art of negligence in maintaining the canals and embankments were also exposed during these flash floods. Most importantly, the lack of building regulation around rivers, canals and widespread encroachments demonstrate that the colonial construction of an extractive but localized rule-based state had fallen to pieces.

Strengthen local capacities: In these circumstances, the urgent requirement for the provincial governments is to set up local government systems. Khyber Pakhtunkhwa and Balochistan have already passed laws, which despite their limitations, set out the framework. Punjab is considering various options and in Sindh – where the devastation has been colossal – political battles confound the need for sound local governance structures. After the passage of the 18th amendment, the provinces have no further excuse to stymie the local government agenda. This cannot be delayed as the governance vacuum at the local level is a ripe field for the non-state actors of the Islamist variety to assume control.

While the reform will take a few months, there is an urgent need to work on the areas (removing flood debris, de-silting, rehabilitation of land, clearing of pathways, dikes etc.) that make people vulnerable to disasters. There can be no alternative to put into place sound building regulations (already part of the Union Council and district governments’ mandates under local government laws of 1970 and 2001). Similarly, there is a vital need to strengthen the capacity of deconcentrated structures of irrigation departments in districts and divisions. The integrity of river banks has been damaged and human settlements have emerged without planning, regulation and the safety measures.

Climate change: Much has been written about the nexus between the climate change imperatives and the recent natural disaster. Merciless deforestation – another sign of utter failure of forest management systems – and other environmental horrors have led to severe damage to the ecology and biodiversity of the country. Global pressures and regional factors contributing to the process of climate change mean that the early warning time has been reduced.

Concurrently state failures have also meant that the capacity to respond to disasters has been compromised beyond belief. In other South Asian countries such as Bangladesh, effective planning and conscious efforts to manage calamities have led to innovative strategies. For instance, schools and other public buildings are supported by columns and additional space works as community shelters in need. On the other hand, we saw televised images of people walking for miles and were forced to lose their dignity.

Local adaptation plans: It is therefore imperative that local climate change adaptation plans are devised through the local governments with adequate capacities. The relief/early recovery phase might be the right entry point to focus on strengthening local capacities. Even relief and rehabilitation without sound local governance structures will be ineffective and result in further erosion of state legitimacy.

Climate compatible development: We will need to move in the medium term to a mode of development that is climate compatible and which ensures that national and provincial planning processes make an overt effort to include the climate change agenda as part of the mainstream development priorities. A useful way to begin would be to undertake climate proofing of the ongoing annual development plans. A well coordinated strategy would be required now, without further delay, to balance the goals of global warming, progress on poverty reduction and the Millennium Development Goals (MDGs).

Distant MDGs: Our lagging social and economic indicators should now be the top-most priority. We are vulnerable because we are not investing enough in achieving the MDGs. The sanitation crisis in the aftermath of the disaster has exposed that we have no local social services infrastructure that can lead the recovery process. The number of doctors and paramedics is inadequate and the state of social services remains abysmal.

Investments: Pakistan will require 5-10 billion dollars investment with specific climate change mitigation and adaptation measures in the medium term to cope with the magnitude of this disaster. This is a conservative estimate as an accurate picture of the real, cumulative losses is yet to emerge. Mechanisms such as Climate Investment Funds are instruments that support low-carbon and climate-resilient development through scaled-up financing. All of this requires finding a domestic mechanism to synchronise the Planning Commission, the Ministry of Finance, the National Oversight Disaster Management Council and the defunct Ministry of Environment.

Pakistan’s governance is a nightmare for its citizenry. More importantly, it is also an international issue now. The multi-dimensional disaster in Pakistan could lead to unrest and instability in a country where the state writ has eroded and non-state actors operate with impunity. Add to this environmental and planning failure[s]; and the script is set for a major upheaval that on one can afford. It is time that our policy makers realize the gravity of the challenge ahead and focus on reconstructing Pakistan instead of engaging in petty politics and point-scoring.