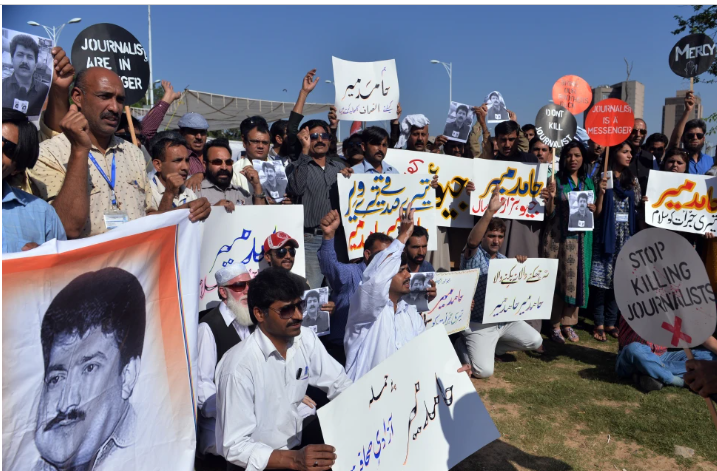 Pakistani journalists hold placards and photographs bearing the image of Geo television journalist Hamid Mir during a protest against the attack on Mir by gunmen in Islamabad on April 23, 2014. Pakistan’s defence ministry has asked for the country’s top-rating television channel to be shut down after it broadcast allegations blaming an intelligence agency for shooting a leading journalist, officials said. The move comes after Geo aired claims that Pakistan’s powerful Inter-Services Intelligence (ISI) agency was behind the shooting of prominent anchor Hamid Mir in Karachi on April 19, 2014. AFP PHOTO/Aamir QURESHI (Photo credit should read AAMIR QURESHI/AFP/Getty Images)

South Asia remains one of the most repressed regions for journalists and by governments muzzling the freedoms of the press, the region’s democratic gains are in jeopardy.

South Asia, home to one-fifth of the world’s population and growing fast, has undergone major democratic transitions in the past decade. Today, all the countries in the region are governed by democratic systems. With Nepal’s successful toppling of its monarchy a decade ago and Pakistan’s transition to democracy from military rule, the portents have never been so encouraging. Similarly, Afghanistan, the victim of perennial conflict, is also moving towards democratic governance and reform. These developments are ground-breaking given the turbulent history of the region.

Yet, on one vital test of democracy freedom of the press the region is lagging. Between 2013 and 2015, South Asia remained one of the most repressed regions for journalists. According to Reporters without Borders, which publishes a press freedom annual index ranking 180 countries based on the freedom granted to members of the press, countries in South Asia rank discouragingly low.

Most of the countries in South Asia have scores in the bottom two tiers on the press freedom index. In the 2015 index, South Asian countries remained fairly stagnant from previous years: Pakistan ranked at 159th place; Bangladesh was ranked 146th; Sri Lanka was ranked 165th; and the Maldives was ranked at 112th place.

Media freedoms are under attack in most countries in the region. Ahmede Hussain, head of The Daily Star Books in Bangladesh, in an interview with the author said: In the last few years, three television channels have been banned and the editor of the right wing Daily Amar Desh [My Country] was imprisoned. Hussain added: Senior leaders of the ruling party quite openly threaten, sometimes in the parliament, to take action against the independent media for running reports that do not run in their favor. At least four bloggers in Bangladesh were killed during the last two years for their views on the country, with the latest occurring just yesterday, and impunity persists despite nationwide protests.

The situation in Sri Lanka is even more worrisome. During 2014, the government pressed the media to not report the violence against Muslims in the country’s southwest. Those who ventured to cover the sectarian clashes had their equipment destroyed or were physically attacked. Furthermore, the government-supported paramilitary groups were accused of murdering a newspaper journalist, Aiyathurai Nadesan, in Batticaloa. On the positive side, the newly-elected president, Maithripala Sirisena, promised to end repression in his January 2015 acceptance speech, hopefully reversing some of the past trends.

Pakistan remains most inexplicable. Despite the explosion of private media in the past decade, press freedoms have drastically reversed since the beginning of the decade. In 2002, Pakistan ranked 119th but dropped to 150th place only two years later. In a recent interview, Pakistan’s prominent journalist Hamid Mir (who took six bullets to his body last year for highlighting human rights abuses) said: I am still under threat. I am using a bulletproof vehicle these days and move with private guards. I am not touching some sensitive issues these days. Two private television channels were suspended in 2014 for bringing national institutions into disrepute and dozens of journalists faced threats to their lives, especially in conflict zones such as the southwestern province of Balochistan and the tribal regions bordering Afghanistan. Mir’s conclusion is worth noting, he said: Pakistani media are losing their freedom very fast. If media will lose their freedom, then there will be no democracy and if there will be no democracy it will be difficult for the state of Pakistan to survive.

While India has much to celebrate on the evolution of its democratic system, recent press trends are disconcerting. Journalists in India face multiple pressure points. Sumit Galhotra of the Committee to Protect Journalists told the author: The state has been clamping down on media freedoms and engaging in flagrant censorship. The Modi government’s recent ban on Al Jazeera and documentaries like India’s Daughter are prime examples. At the same time, Galhotra said: Journalists are being threatened and silenced by various non-state actors that include religious and political groups, criminal elements, and corporate houses.

For the world’s largest democracy, it is disconcerting to hear senior investigative journalists saying that big businesses handing out legal notices has become standard practice in the country.

In Nepal, journalists continue to face peculiar hurdles. While the recent conviction and sentencing of the mastermind in journalist Uma Singh’s murder marks a step in the right direction towards addressing the culture of impunity, Nepal still has a long way to go in fostering a safe and secure environment for journalists. Not unlike other countries, self-censorship is rife.

The majority of South Asians are young, below the age of 30, participating in communications revolution via new media. Digital freedoms have also come under threat in recent years, despite low levels of internet penetration. In Bangladesh, the government arrested a shopkeeper for lampooning the country’s leadership on Facebook, and in Pakistan, a parliamentary committee has approved a draconian draft bill that will curtail online freedoms. In India, the Supreme Court in March struck down a clause of the Information Technology Act that made publishing offensive online material punishable by three years in jail but upheld the government’s right to block websites after following due procedure.

None of the countries in the region are ranked as free by the global watchdog Freedom House. Only India, Nepal, and the Maldives are categorized partly free, while the remaining is placed in the not free category. (Civil and political liberties and media freedoms are inherent to Freedom House rankings.)

Democracy is not limited to elections, nor does the existence of a parliament ensure citizens’ freedoms. The right to information is central to a democratic polity and muzzling of freedoms of the press endangers the region’s democratic gains made in recent years. International rights groups need to work closely with their local counterparts in tracking the abuses and alerting the international community as authoritarian forces struggle with the aspirations of a young, restive population that seeks more transparency.

A twist in the tale

Another Pakistani Journalist Threatened. Will the State Protect Him?

Digital media can be an opportunity for civic engagement by