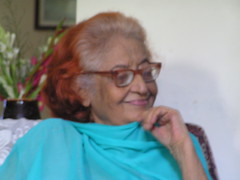 I have been upset the entire day. Perhaps it does not matter in the larger scheme of things. But this is a sad, sad day. Qurratulain Hyder, the literary giant of our times is no more. At a personal level it is not just the death of another literary figure but it is far greater and deeper than that. Ainee inspired generations of Urdu readers and there is not a single Urdu writer of post-independence era who has not been influenced by her.

Ainee had a civilizational consciousness that took us beyond the nation-state identities that we are so familiar with in our everyday lives. And, of course there was romance – the notion of eastern and Indic romance – that touched our lives. As I wrote earlier, that the way I have understood the world and perhaps parts of myself were deeply influenced by Ainee.

And now her death is a blow that this source of inspiration is not there anymore; as it is we are living in barren times where literature is about marketing and packaging and catering to consumers.

Ainee primarily wrote for herself but reached out and made her mark – and in the process she connected with millions of readers. And I am just one of them. My friends and I have talked today and we recounted how she shaped our inner lives. 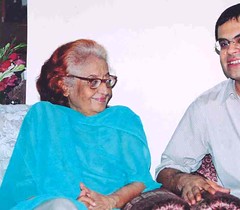 I have at least avoided a regret – I met her after years of longing. Met her twice at her house in her frail state and enjoyed the hours. The impressions were indelible. Of course, the ambitious self had planned a meeting later this year.

But there will be nobody in that Noida house. That little temple opposite her house will remain and the sound of Azaan from a neighbouring mosque will also heard. But the hearty laughter, quick witted lines and inimitable writings will not be there.

However, as a friend said – writers die, their stories don’t -makes me a little content.

Farewell, Ainee Apa. May God keep you happy wherever you are..

102 thoughts on “Qurratulain Hyder is dead!”