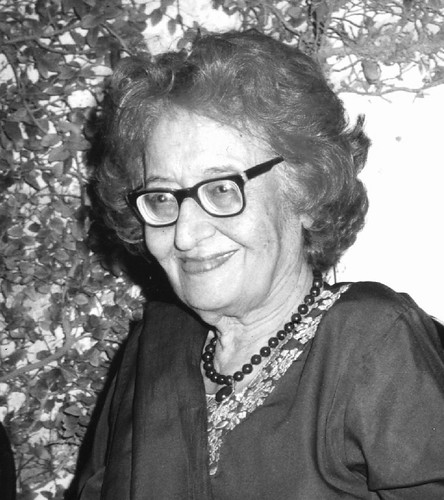 SG has sent me this old audio recording of Qurratulain Hyder when she visited London in the 1990s and was interviewed by theÂ BBC.

This is a great interview, with Ainee Apa at her best: quick witted, sharp and entertaining. During the interview she makes fun of the light weight journalism and then remarks on how a writer or an artist gets stuck by an image. She talks of an image from the Iraq war – a 15 second long clip – where a woman is questioning as to why is she a victim of a war.

About getting the highest national awards, she is a little reticent to say much, perhaps finding it ‘boring’ in her usual style. In fact she is even a little mocking but then corrects herself immediately.

Another great feature of this recording is that she reads a portion of her (then) latest novel Chandni Begum. (This is one of her later novels and brings forth the evolution of post-colonial India, the confidence of the new generations and the replacement of the old order with the new complex Indian reality. This is also a curious novel, where the protaganist -Chandni – dies at an early stage of the plot and life moves on…Only Ainee could have handled such a story and narrative).

In her reading, Ainee impersonates the characters – street performers or nautankee wallahs– and the passage invokes an entire mood, sociology and politics of how the performing troupe[s] function and finds their stars. There is reference to an artiste who in her greed has renounced her art and has moved to Dubai as an ayah (a domestic helper or a nanny).

The ultimate historical value of this audio-clip is the background to her translation of a 1790 novel authored by a junior official of the East India Company called Hasan Shah.

This novel entitled Nashtar and written in a mix of Hindi and Persian was discovered by Ainee from the Aligarh library. She translated it as “The Dancing Girl” (there is a version called The Nautch Girl as well) and published it in the late 1990s.

The novel, claims Ainee, is the first (South Asian) novel in a modern sense. The author was a contemporary of Jane Austen. Ainee also mentions the book’s contemporary style of writing, fascinating characterisation and the historical value with respect to the narration of the English Officers’ lifestyle and their immersion in local culture and manners. This changed, as Ainee reminds in this clip, during the reign of Lord Cornwallis when the English officials were asked to develop and maintain a distance from the natives.

(Hasan Shah’s novel was translated in 1890, prior to the publication of Umrao Jan, and therefore Ainee strongly maintaned this to be the first novel. Later some critics disagreed but Ainee held to her point of view based onÃ‚Â irrefutable evidence she had painstakingly gathered.)

Listening to this voice in its full force was a pleasure. What a little gem – and I cannot thank my friend more for sending this link.

Postscript: Today, Pakistan’s Geo TV also ran a programme on Ainee in its popular talk show ’50 minutes’. Tributes were paid and senior writers (including Abdullah Husain who was accused by Ainee of plagirising her in his novel Udaas Naslain! – the gentleman was quite incoherent) held forth on her ‘stature’. Some of the discussion was good though a few comments were pretty prosaic (Ainee Apa would not have liked that stuff). But then she must be smiling at Abdullah Hussain declaring on national television that she was the greatest of Urdu novelists!