Raza Rumi was in Delhi 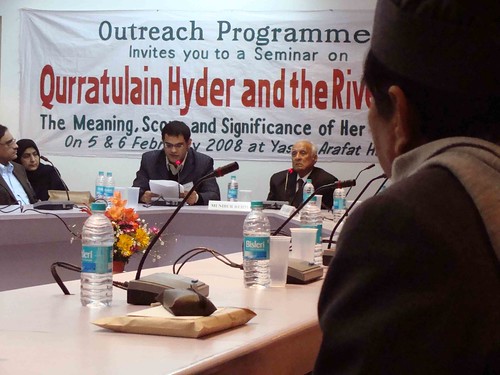 A budding writer from Lahore visits the city of his beloved author.

I was [pleasantly -why lie] surprised this morning to discover a story on yours truly with the byline –Raza Rumi, A Pakistani About Town. It is a well written piece – not because that it concerns me but it sort of collates the various things I said and did during my recent visit and twists them into an engaging narrative. Never mind the less flattering description as a “cliched tourist”. My delusions about being a traveller were sort of questioned.

I still have to write about that visit earlier this month when I stayed at the Jamia Millia Islamia to attend a seminar on Qurratulain Hyder, the towering Urdu littÃƒÂ©rateur. During this visit, I met a number of interesting people and participated in some lively sessions that brought me much closer to the intellectual core of Delhi. My friend Mayank Austen Soofi, whom I finally saw after all the blog exchanges, attended the seminar at Jamia and later accompanied me to the Nizamuddin dergah. Of course Sadia Dehlvi was there as always – walking me through the chaotic moods of Delhi.

All I can say is that one has to be careful with bloggers and journos. Who knows when mundane conversations turn into eloquent posts and stories, only to unexpectedly appear in your inbox a few days later.

When I get my act together I will write about what I had to say about Qurratulain Hyder’s dual belonging.

While I continue to overcome my indolence, please read this accountby The Delhi Walla.

The ignorant Delhi wallas often view visiting Pakistanis as ISI agents or trouble-makers. Mr. Raza Rumi, a native of Lahore, is neither. He has no beard, no moustache. He never frowns, he smiles (actually, he smiles a lot). He has a sleek laptop, no Kalashnikov. Yet he set the city on fire.

As Pakistan’s celebrated blogger, he was invited by Jamia Millia Islamia University to speak on a seminar on the Urdu novelist Qurratulain Hyder. Mr. Rumi came, read, and wellÃ¢â‚¬Â¦conquered.

Everyone loved his take on the late writer’s enduring popularity in Pakistan. ‘Passionate’, ‘heartfelt’, and ‘excellent’ were some of the words used to describe his lecture. At least one overawed academic considered withdrawing his paper after listening to “such great stuff.”

In his presentation, Mr. Rumi had to say this about her:

Ã¢â‚¬Â¦Ã¢â‚¬Â¦ Hyder, till her last, remained a unique bond between India and Pakistan. She was a regular visitor in Pakistan that was her second home in actual terms. Her family, friends and admirers were in a large number that never distanced her from Pakistan. Like her characters, she traveled, migrated and re-migrated and became a chronicler of our times, not as a historian but as a fiction writer.

In the following days, The Delhi Wallawas amused by interesting conversations with Mr. Rumi. This Pakistani can speak for hours, sometimes a little self-conscious, but mostly laced with stories that are quite entertaining.

During his last trip to the city, Mr. Rumi had gone to Urdu Bazaar, near Jama Masjid, to buy Kaf-e-Gul Farosh– Ms. Hyder’s hefty two-volume pictorial autobiography. Its steep price did not matter. He has always been Ms. Hyder’s devoted reader and considers himself lucky to have met her in person. During his first trip to the city, 3 years ago, a close friend took him to Ms. Hyder’s residence in Noida where he presented rajnigandhaflowers to her, along with a few cassettes of some obscure thumri singers.

This does not mean that Mr. Rumi is always lucky.

He regrets that he had the ill-luck to born a little too late to meet another outstanding Delhi resident he admires – C. The greatest of Urdu poets, to use Mr. Rumi’s hyperbole, died 99 years before he was born. But Mr. Rumi cannot be blamed for not doing what is proper. He always read the fatihaas he passes by Ghalib’s tomb that falls on the way to Nizamuddin dargah. By the way, this sufi shrine is Mr. Rumi’s favorite Delhi haunt.

Within the shrine lies the tomb of Jahanara, Shahjahan’s daughter. This Mughal princess had requested that no roof should be erected above her burial place. Only grass grows there. Mr. Rumi considers her as a woman sufi and likes sitting next to her tomb.

This may be a flattering portrait of Mr. Rumi as a devotee of the Sufis. Alas, he can be a clichÃƒÂ©d tourist too. As he related, he also loves to haggle with the Kashmiri carpet sellers, find bargains in the Dilli Haat, and fill a sack full clay crafts from rural India. And above all, he, quite smoothly, enters the HumayunÃ¢â‚¬â„¢s tomb as a local (remember, foreigners are charged in dollars). Of course, who would doubt his chaste Lucknow inspired Urdu.

But the devotion to Hazrat Nizamuddin Auliya and the music of Amir Khusrau brings him back, again and again, to the Bastee that he calls the spiritual ghetto–a little haven of peace amidst the maddening commercialism of Delhi.

Not unlike his views on Ms. Hyder whom he calls a Ã¢â‚¬Å“a dual citizen in an age where acrimonies of Partition and officialdom have made it impossible to hold concurrent citizenshipsÃ¢â‚¬Â, Mr. Rumi has not entered the Delhi scene. We hope that like his inspiration, Ms. Hyder, he can defy these official restrictions not by breaking any law but espousing a sense of Ã¢â‚¬Å“belongingÃ¢â‚¬Â that needs no passports. 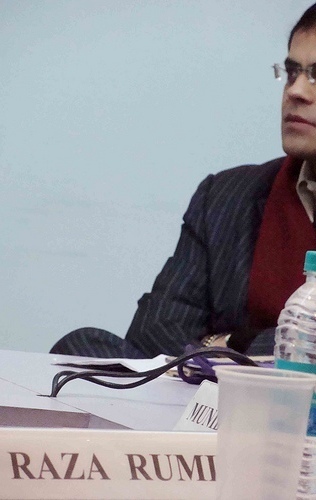 71 thoughts on “Raza Rumi was in Delhi”