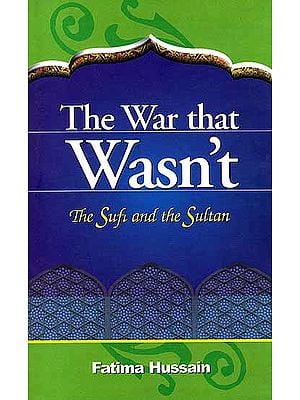 ‘The War that Wasn’t: The Sufi and the Sultan’

Last year I had a chance to meet Dr Fatima Hussain, a thoughtful and inspiring academic based in Delhi. We had all congregated in Agra for the SAARC writers’ summit and Hussain’s facility with subcontinental history, especially Sufism, was most impressive. This is when I found out that her book had just been published and my curiosity to read the book knew no bounds. The title of this book was even more intriguing: “The War that Wasn’t: The Sufi and the Sultan”. Essentially the title summarises a millennium of the societal resistance offered by the Sufis against state power as well as the embedded social relations in the Indian subcontinent.

Hussain teaches History at Delhi University and was educated at Lady Shri Ram College and Jawaharlal Nehru University, New Delhi. She has also authored The Palestine Question: A Historical Perspective (2003) and several scholarly articles. An interesting volume that she edited – Sufism and Bhakti Movement: Contemporary Relevance (2008) – perhaps explains the relative fluency of her familiarity with the subject. After her marriage to Pakistan’s leading Punjabi writer and activist, Fakhar Zaman, she is now delving into documenting the history, culture and morphology of Lahore.

Hussain’s painstakingly researched book analyzes the nuances of the power exerted by the Sufi movement in the Sultanate era of Indian history. Quite obviously this power was a direct threat to the Sultanate for it was an alternative platform of social and political engagement. This perspective has been recorded elsewhere but not examined thoroughly, especially for lay readers, and Fatima Hussain succeeds in conveying the history of this important era in a most readable manner.

The book is divided into eight chapters that trace the evolution of Sufi gnosis and tariqha (practice), its application in the South Asian context and its growth into a parallel power centre in medieval India. My favourite chapter is the one that details the political and sociological contours of a Khanqah (a public space for engagement with the Sufi teachers). Hussain’s book takes the reader inside a Khanqah and uses anecdotes and oral histories around the Sufi practices in the Indian subcontinent. Hussain’s descriptions of the Sufi khanqahs are most readable:

“The Chishtis seemed to understand the religious ethos and the aspirations of the Indian people. They even adopted many Hindu and Buddhist customs and ceremonials. The practice of bowing before the shaikh (also influenced by Persian tradition), presenting water to visitors, circulating zambil (begging bowl), shaving the head of new entrants, etc., emanated from Hindu and Buddhist practices. However, a major reason for the popular appeal of the Sufis was their concern for the people. For instance, once a dervish came to the jamaat-khana of Shaikh Nizam al-Din, while he was having his mid-day rest. Akhi Siraj, who was in the Shaikh’s presonal attendance, sent him away. Shaikh Farid appeared to Shaikh Nizam al-Din Auliya in a dream and said: ‘If you have nothing to give to a visitor, at least treat him cordially.’ On waking up, the Shaikh reprimanded Akhi Siraj and instructed him to wake him up from his rest whenever a visitor came.”

Hussain tells us how the Sultans in medieval India competed for Sufi blessings and backing due to their widespread support within the masses irrespective of religion, caste and ethnic background. Sufis’ support to the rulers of Delhi throne was never unconditional, argues Hussain. It came in short supply and only when the rulers’ values were compatible with Sufi Weltanschauung . Hussain notes the immense hold of Sufis over popular imagination:

“They [Sufis] were perceived as extremely pious and endowed with all conceivable virtues. In this piety of the Sufis, the people saw the extrapolation of their own urges to become pious. They tried to identify themselves with the saints and to follow their ideals…The Sufi attitude towards the people, in contrast to that of the governing class and ulama, was characterized by greater dynamism and better understanding of the people.”

Nevertheless, there was a symbiotic relationship between the Sultanate and the Sufis as thousands of Indians converted to Islam due to the tolerant and inclusive Islam demonstrated (not always preached) by the Sufis. This enhanced the legitimacy of the Muslim ruler but Sufis, especially the Chistia order, were averse to identifying themselves with the power-game. Furthermore, due to an absence of rule of succession in the medieval monarchial system, Sufi support was vital for the people’s perception regarding the Sufi bestowal of kingship.

Hussain’s sociological analysis is also incisive. She holds that in addition to the marketplace, “there were four other institutions where people could have interface with each other. These were-the court, the temple, the mosque, and the khanqah. While mosque and temple were places visited by respective religious groups, the court was a place where either nobles and government officials or people with grievances or accused of certain crimes or for evasion of taxes, generally visited. On the other hand, the khanqah was an open place for all, where the concept of equality was predominant.”

Thus Khanqah’s legitimacy was further bolstered by the fact that many saints were from higher strata of society, i.e., were either Sayyids and descendants of Central Asian mystics which led to their higher social acceptability in a caste ridden Indian society. Hussain attributes this particular factor as a reason why the upper class Hindus and Muslims became devotees of Sufism. The case of Rajputs is illustrative as for centuries the rulers of Ajmer visited Shaikh Mu’in al Din’s shrine.

The complex relationship of State and the Sufis is also handled well by Hussain. She maintains that Sufi power complemented the state authority as the Sultans always referred to Sufis for blessings during campaigns and undertaking welfare measures. When it was unavoidable, the Sufis and the Sultans interacted. Thus, Shaikh Qutb al-Din Bakhtiyar Kaki and Shaikh Nizam al-Din Auliya (of the Chishtia order) had to visit the court once each in their lifetime for compelling reasons.

But this distance from the court was not shared by all the orders. For instance, the Suhrawardis as Hussain tells us, “had no inhibitions in meeting the Sultans or visiting the court – They supported the Sultanate, and occasionally advised suitably.” The degree of incompatibility, cooperation, and distance between the Saints and the state as Hussain notes “varied from silsilah to silsilah, from time to time and from Sufi to Sufi.” This is an essential point to understand the complexity and nuances of Sufi-state interaction that cannot be simplified.

In an age when the Sufi Khanqahs have declined in terms of their impact as well as ethical standards, it is almost incredible to read this wondrous account. Sufi power started to decline when later Mughals started to associate the descendants of great Sufis into their power politics. The trend had started much earlier when as Sufis over the centuries grew closer to the courts. State patronage especially in terms of land and other handouts diminished the essence of the Sufi ethos, i.e. distance from the messy intrigues and petty aspirations of the courtiers. But the light of Shaikhs, Qutubs and Khawajas continues to inspire millions.

Hussain’s book is a must read for all those interested in Sufism especially in the current times when Sufi beliefs and practices are under threat by the extremists in South Asia.

Raza Rumi is a writer and policy expert based in Lahore. He blogs at http://razarumi.com. Email: [email protected]