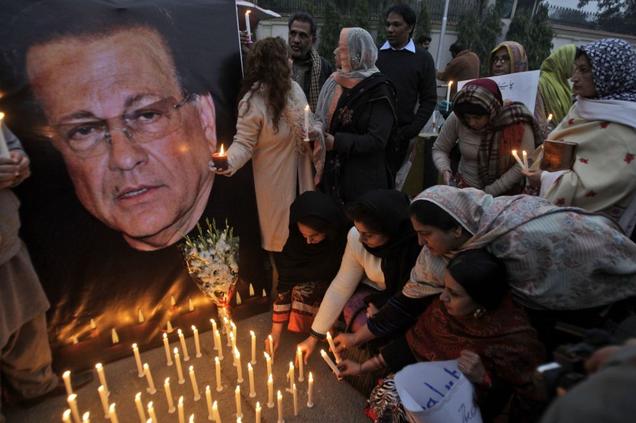 Salmaan Taseer, businessman, publisher and Governor of Pakistan’s largest Province, was killed by his bodyguard a zealot who like his supporters thought that Taseer had committed blasphemy against Prophet Mohammad by defending a Christian woman booked under the country’s notorious blasphemy laws. His murderer was punished in 2016 but the battle against extremism continues. Today is Taseer’s sixth death anniversary.

Salmaan Taseer’s defiance of the convention and collective cowardice is one of the watersheds of Pakistan’s contemporary history. His defence of a poor Christian woman, purely on the grounds of humanity, has chiseled his memory and legacy. Taking a position on a narrowly defined religious issue is rare in today’s Pakistan. Even rarer is to defend someone on the grounds of humanity in a republic that uses religion for its identity and rationale; and where public opinion has been crafted to perpetuate such attitudes.

Within the Muslims this struggle between reason and bigotry is not new. It has existed for well over a Millennium. Rationalists have always been the target of fanatics and their patrons in power. In South Asia this is even more complex where the historic evolution of Muslim beliefs and practices has followed an inclusive trajectory imbibing the folk, non-Islamic traditions as expressions of lively, dynamic Islam. Over the centuries, the power of orthodoxy was challenged by unique men and women who took dissent more important than Mullah’s edicts. In the medieval era, Sufi poet Bullleh Shah and Mughal prince Dara Shikoh and later princess Zebunnissa, among others, faced persecution. Dara Shikoh had to lose his throne and his life in pursuit of a humanistic vision that sought to reiterate the essence over the form, spirit over the ritual and synthesis over divisions. The bigots declared that he was a heretic and his own brother leading the pack ordered his killing.

I was under huge pressure sure 2 cow down b4 rightest pressure on blasphemy.Refused. Even if I’m the last man standing

Taseer’s politics was fiercely anti-orthodoxy based on his progressive worldview. Taseer was also a staunch Pakistani nationalist and viewed Pakistan’s destiny as a modern and enlightened country. This was a position espoused by his party – the Pakistan People’s Party – through the 1970s and onwards. In 1990s, disillusioned with the changing nature of Punjab politics and his own party’s drift towards pragmatism, Taseer took a break and focused on expanding his business empire. Musharraf’s rule came as another faux moment that brought him back into active politics. A short stint under Musharraf as an interim minister was a tricky decision but it enabled his re-entry into political life. He had decided to end his political ‘exile’.

The PPP returned to power in 2008 and in May of that year appointed him as the Governor of the Punjab province where his political foes – the Sharif brothers – were, and still are, in power. Taseer within a few weeks made his presence felt. As a titular head of the province without executive powers he acquired moral authority by taking bold ideological positions that were at variance with the ruling party. Consequently, the Pakistan Muslim League (Nawaz) had to appoint a few ministers whose task was to respond to all that Taseer said and did as the governor. This was a sign of Taseer’s re-emergence as a progressive voice in the province that had accepted the post-Zia wave of radicalisation. Punjab, by then, had become the home ground for many militant networks and extremist ideologies. From the sectarian hate machines to the Punjabi Taliban to the soft-Islamism of the Barelvi school this was a province radically different from what Taseer and many of its progressive inhabitants were used to. His public statements against Saudi sponsored radicalism were subject of TV debates. This was not irrelevant but intensified the ideological struggle within Pakistan. Lahore’s roads are full of cars that display signs ‘Al-Bakistan’ – a clear sign of Arabisation of an otherwise secular culture of the province. Taseer was a bulwark against this trend.

Religous right trying 2 pressurise from the street their support of blasphemy laws.Point is it must be decided in Parlaiment not on the road

Taseer was termed as ‘Westernized’ and ‘liberal’ by the ministers of the ruling party. Even his children became targets of a media hate campaigns. These were ominous signs and the case of Asia Bibi became the bête noire of Pakistan’s Mullah brigade. Taseer took a bold stance, visited the victim of an odious law in the jail and vowed to fight for her rights. Sensing the strong opposition, his party backed out of the fight and ultimately Taseer was left alone with a small, insignificant civil society backing him. This was also a moment of PPP’s capitulation to the Mullahist Pakistan; and the consequences were disastrous.

An elite police guard took it upon himself to punish this alleged sinner for he had challenged the nature and implications of blasphemy law that continues to haunt Pakistan’s minorities and other weaker groups. The most harrowing case in recent years was that of a Christian couple who were burnt alive after being lynched by a self-righteous mob. The accusation of blasphemy was purely political and played by sections of irresponsible media that continue to promote hate speech. So-called religious scholars on television invite bigots to declare religious minorities as wajib-ul-qatl (fit for murder) and get away with it.

January 4, 2011 was not simply the day Taseer was murdered by a loony wolf. It was the culmination of suppressing reason in Pakistan where civilized discourse has given way to threats and bullets and where military courts and public hangings are considered as ‘justice’.

But Taseer’s sacrifice and his brave walk towards the death trap will remain an inspirational symbol. Recent efforts by young men and women in Pakistan to challenge the Mullahism emanate from Taseer’s legacy. This will not be an easy or short battle. It is likely to continue and each time there will be mention of justice, rights and rationality, Taseer will be mentioned. Not unlike Bulleh Shah, Mullahs declined to offer his funeral prayers and like Dara Shikoh there were front-page advertisements declaring his as a blasphemer. But all of that means nothing for posterity.

April 1, 2017: Taseer will live as an icon for a sane, just Pakistan (Huffington Post)

This is an unedited version of an article published by The Daily Times on January 4, 2015 as part of a special supplement.
Tags: Blasphemy LawExtremismHuman RightsSalman Taseer