140 dead and 538 injured – this little byline cuts through hearts and our future!

Yesterday was the day of images – moving pictures of excitement, energy, applause and then the saddest of recent tragedies.

Innocent men and women charged with emotion and enthusiasm were blown away by suicide bombers, remote devices and alien belief systems. Or was it the case of wilful machinations and deceit. Only time will tell.

She had arrived much like the Greek characters – tearful, maligned, triumphant and a little pawn in the hands of the gods. Amid the voices of criticism and hypocrisy that fail to note the complexity of our times, she emerged as a people’s woman – once again. Here were the loyalists dancing, singing and clapping – their queen, exiled and beaten had re-emerged.

They couldn’t care about the cost or the process. That was 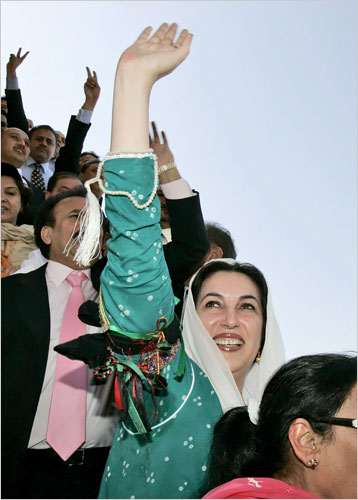 for the armchair classes of Pakistan to ponder about. The pull of Bhutto-name for the have-nots was once again re-established. So began a journey on the blood-lined roads of Karachi that have cracked with violence, blood and lawlessness. Yet they moved ahead oblivious of the fault lines that run from the drab, destroyed villages of Afghanistan to Karachi passing through a web ofÃ‚Â  seminaries, officialdom and Lal Masjids of this world.

And so halfway, this peaceful journey – a testament of what the real Pakistan is all about – halted. And, something had erupted: imperial projects, state diktats and the crumbling centre. There were flesh, blood, fire and tears. And the wretched TV screens have documented all of this.

Devastating is one word that replaced amazing by the time we crossed the midnight in Pakistan!

A splinter is often
difficult to get out.
How much more difficult a thorn
in the heart! If everyone could find that thorn
in themselves, things would be
much more peaceful here! 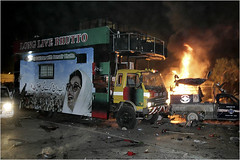 There is a head now flashed on the screens – they canÃ¢â‚¬â„¢t tell if it was a Jiyala or the suicide bomber. The TV channels are flashing bodies again and again Ã¢â‚¬â€œ as before, discretion was thrown to winds and we have the singular honour of being a country where human limbs and guts of the dead are not just flashed but imposed on the senses until you are numb, exhausted and terrified. And, glorifying terror is the last thing we need.

Urooj Zia, a newspaper reporter was there:

Ã¢â‚¬Å“The bomb blasts happened while we were there. I was stunned, to say the least. There were people, bits of people, blood EVERYWHERE. An AryOne World cameraman lay there dying in front of us. We moved him to a police mobile, but he died in the hospital. I knew he would. I got his blood all over me — my hands, arms, clothes, shoes.
Then there were charred bodies of policemen — smoke rising from them. Slippery blood everywhereÃ¢â‚¬Â¦.I went back to work after that, filed my story. Got home around 04:00 a.m., couldn’t sleep for two hours coz I couldn’t get the images out of my head. Puked a couple of times too.Ã¢â‚¬Â

This tragedy is not just about who is responsible for this carnage. When humanity is in danger, we have to rise above our biases and loyalties and condemn what is WRONG. This is an issue that we all have to now live and deal with.

Our religion does not allow targeting women even in wartime and suicides are FORBIDDEN. Period. There is now a consensus at Al-Azhar and various other places of Islamic scholarship. If this is about Waziristan or the Lal Masjid then it should be fought elsewhere and not against the unarmed, dispossessed political workers.

All Pakistanis have to unite in condemning this barbarity. And all definitions of Pakistaniat ought to be involved in this process Ã¢â‚¬â€œ bickering at this stage will only make us question as to what message are we sending to the world that we in the words of Qandeel are Ã¢â‚¬Å“multiple little groups all bopping their heads against one anotherÃ¢â‚¬Â?

Violence, militancy and suicide attacks are and will remain unacceptable. Legitimate politics must not give way to war-lord-ism! I end with Faiz:

0 thoughts on “The devastating midnight attack”