Tehelka magazine has this story on how magic and adventure render the Hamzanama the most popular oral epic of the Islamic world.

IN JUNE 2002, as Pentagon strategists were making their plans for the invasion of Iraq, a short distance away down Washington’s National Mall, the Freer- Sackler Galleries at the Smithsonian were showing one of the most interesting exhibitions of Islamic art seen in the US for years. Ironically, the show was made up of illustrations of a story largely set in the very Iraqi cities which were shortly to find themselves as targets for the Pentagon’s munitions. 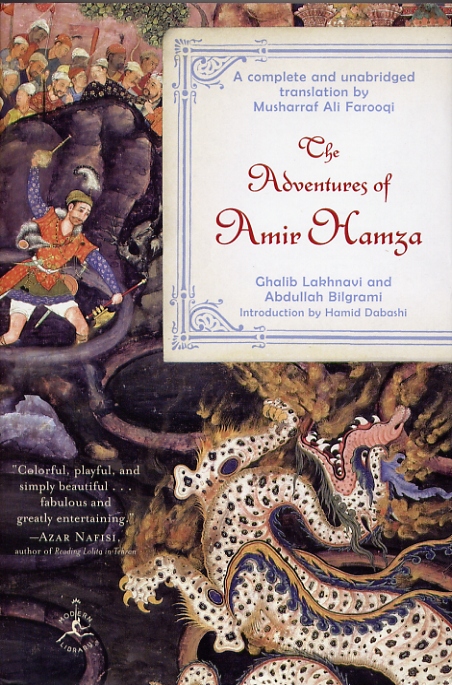 The Sackler show was unusual in that it displayed just one single painted manuscript the Hamzanama: a spectacular, illustrated book commissioned by the Emperor Akbar (1542-1605). For art historians, the show was fascinating for it brought together the long-dispersed pages of what was the most ambitious single artistic commission ever undertaken by the atelier of an Islamic court: no fewer than 1,400 huge illustrations were produced.

Before commissioning the Hamzanama, the Mughal miniature painting atelier seems to have contained only two artists, Mir Sayyid Ali and Abdus Samad, whom Akbar’s father, the emperor Humayun, had lured from Persia and who had, between them, produced only a handful of pictures since their arrival in India. Akbar changed that for ever by commissioning no fewer than 1,400 huge illustrations to the Hamzanama the largest single commission in Mughal history. The project forced the atelier to train more than 100 Indian artists (many of them apparently Hindu painters from Gujarat) in the Persian miniature style, as well as troops of poets, gilders, bookbinders and calligraphers.

The resulting volumes took more than 15 years to produce and in the process, effectively gave birth to an independent Mughal miniature tradition, a wonderful combination of Persian, central Asian and Indian styles, and a revolutionary leap forward from all the artistic currents that preceded it; one in which you can see the two artistic worlds of Hindu India and of Persianate Islamic Central Asia fusing to create something new and distinctively Mughal.

Some of the illustrations are very Persian in style: flat linear forms remarkable for their precise, angular, geometric perfection. Other pages are pure Indian in spirit: there are Indian clothes and Indian gestures; the palette is brighter and more dramatic than is common in Persian art, and there is a love of the natural world that is very specific to the subcontinent. The playful elephants that charge across the canvases seem to have arrived straight off the walls of the Hindu rock sculptures of Mahabalipuram. But already in the canvases of the Hamzanama you see the two worlds beginning to fuse, hear the soft ripping of gossamer as wholly Mughal images emerge fully formed from the chrysalis of Akbar’s atelier.

Akbar’s hagiographer, Abu’l Faizal, recorded extensive details about individual artists, and was especially proud of the way that the Persian masters of the atelier had trained up ordinary Indians so that novices have become mastersÃ¢â‚¬Â. One of these, Daswanta, was the son of a palanquin- bearer who was in the service of the court. Urged by natural desire, he used to draw images and designs on the walls. One day the far-reaching glance of His Majesty [Akbar] fell on those things and, in its penetrating manner, discerned the spirit of a master working in them. Consequently, His Majesty entrusted Daswanta to the master of the atelier. In just a short time, he became matchless in his skills. There was, however, a sad ending to this prodigy: Insanity shrouded the brilliance of his mind and he died a suicide.

Over the centuries, the different volumes of the great Hamzanama manuscript were dispersed and became detached from each other: indeed, most were apparently stolen from the Mughal library in the Delhi Red Fort by the Persian emperor Nadir Shah at the same time as he removed the Koh-i- Noor and the Peacock Throne. From Persia, a large number found their way to Austria, where they are currently in the MAK, the Austrian Museum of Applied Arts, while others drifted around the Middle East and the subcontinent. The beautiful leaves now in the Victoria and Albert Museum were found 100 years ago, being used to line the window of a junk shop in Kashmir. The Freer exhibition brought the surviving images back together for the first time in 250 years.

Although few recognised this at the time, the Freer Hamza exhibition was of great literary importance too, and started a process that resulted in the translation of the wonderful book under review, The Adventures of Amir Hamza.

The Hamzanama was an illustrated edition of what was once the most popular oral epic of the Indo-Islamic world. The Adventures of Hamza is the Iliad and Odyssey of the mediaeval Persianate world: a rollicking, magic-filled heroic saga, full of myth and imagination. It was originally composed in Iraq around the 9th century, but contained material gathered from the wider culture-compost of the pre- Islamic Middle East. Such was the popularity of the story that it soon spread across the Islamic world absorbing folk tales as it went, and before long, was translated into Arabic, Turkish, Georgian, Malay and even Indonesian.

It was in India, however, that the epic took on a life of its own. Here it grew to an unprecedented size, absorbing endless Indian myths and legends. In this form it began to be regularly performed in public spaces of the great Mughal cities. At fairs and at festivals, on the steps of the Jama Masjid in Delhi, or in the Qissa Khawani, the StorytellerÃ¢â‚¬â„¢s Street in Peshawar, the professional the story tellers, or dastango, would perform night-long recitations from memory; some of these could go on for seven or eight hours with only a short break. There was also a great tradition of the Mughal elite commissioning private performances of the epic. Ghalib was, for example, celebrated for his dastan parties at which the Hamza epic would be expertly recited.
THE TALES of Hamza collected together a great miscellany of fireside yarns and shaggy dog stories which over time had come to gather around the story of the travels of Hamza, the historical uncle of the Prophet Muhammad. Any factual backbone the story might once have had was, over the centuries, swamped with a flood of subplots and a cast of dragons, giants, djinns, simurgh, sorcerers, princesses and, if not flying carpets, then at least flying urns, the preferred mode of travel for the magicians in Hamza.

Across the Persian-speaking world, from Tabriz to Hyderabad, people would gather around the dastango as he told story after story of the chivalrous Hamza and his beautiful Chinese princess lover; the wise and prophetic Vizier Buzurjmehr and the just Emperor Naushervan. Then there were Hamza’s enemies: the ungrateful villain Bakhtak, whose life Hamza has spared, only for Bakhtak to work unceasingly for the hero’s demise; and the cruel necromancer and archfiend, Zumurrud Shah. In its fullest form, the tale grew to contain a massive 360 separate stories, which would take several weeks of allnight storytelling to complete; the fullest printed version, the last volume of which was finally published in Lucknow in 1905, filled no less than forty-six volumes, each of which averaged 1000 pages each.

Today, however, the Hamza epic is more or less extinct as a living oral epic: while some children in Persia and Pakistan may still be familiar with episodes, the last of the great dastango, Mir Baqar Ali, died in 1928, a few years before sound revolutionised the nascent Indian film industry that itself had borrowed much of its style and many of its plots from the dastango’s story telling tradition.

If the Freer Hamzanama exhibition was the first time a Western audience was exposed to Hamza, it also acted as something of a wake-up call to specialist Urdu and Persian scholars. It was quickly realised that this epic, said to be the longest single romance cycle in the world, had been almost forgotten: barely a handful of scholars had engaged with it, no modern scholarly edition of the epic was in print in any language, and no translation of it into English had ever been made. Yet the epic had had huge influence, not least on Indian drama and cinema as well as on the development of the Urdu and Persian novel, early versions of which were often derived from the Dastans.

Hence, the importance of a remarkable new translation of the Hamza epic which has just been published by Random House India. The translation is the work of the Pakistani-Canadian scholar Musharraf Ali Farooqi, who has worked from the Urdu edition published in 1855 by Navab Mirza Ghalib Lakhnavi, and later revised by Abdullah Bilgrami in 1871. Although a fraction of the size of the 46 volume edition Â only one complete set of which still exists the translated version still weighs in at an impressively heavy 944 pages.

Even in translation, The Adventures of Amir Hamza is a wonder and a revelation a real classic of epic literature available in English for the first time, and in a translation so fluent that it is not just addictive reading but a real pleasure to sit down and lose yourself in; the storyline of the epic itself is endlessly diverting and inventive, and the language and prose of the translation is beautifully rendered.

MOROEVER, THE epic gives a unique insight into a lost Indo- Islamic courtly world. Although the Hamza epic was originally a Persian production set in the Middle East, the Urdu version shows how far the epic had been reimagined into an Indian context in the course of many years of subcontinental retelling. Though the orginal Mesopotamian place names survive, the world depicted is not that of early Islamic Iraq but that of 18th century late Mughal India, with its obsession with poetic wordplay, its love of Mughal gardens, and its extreme refinement in food and dress and manners. Many of the characters have Hindu names; they make oaths Ã¢â‚¬Å“as Ram is my witness; and they ride on elephants with jewelled howdahs. To read The Adventures of Amir Hamza is to come as close as is now possible to the world of the Mughal campfire Â those night gatherings of soldiers, sufis, musicians and camp-followers that one sees illustrated in Mughal miniatures: a storyteller beginning his tale in a clearing of a forest as the embers of the blaze glow red and the eager fire-lit faces crowd around.

The Adventures of Amir Hamza has significance beyond mere aesthetic enjoyment. It is good to know that the book has been widely reviewed and read in the US and the UK, two countries with a growing problem of rampant Islamophobia and massive ignorance about the Islamic world. For the narrative opens in Ctesiphon, not far from Baghdad, and encompasses places now in modern Saudi Arabia, Pakistan and Afghanistan, most of which the US and its allies regard as little more than breeding grounds for terrorism.

At this perilous moment in history, the Hamza epic, with its mixed Hindu and Muslim idiom, its tales of love and seduction, its anti-clericalism Ã¢â‚¬â€ mullahs are a running joke throughout the book Ã¢â‚¬â€ its stories of powerful and resourceful women and its mocking of male misogyny is a reminder of an Islamic world which the West seems to have forgotten: one that is syncretistic, imaginative and heterodox and as far as can be imagined from the puritanical Wahhabi Islam that the Saudis have succeeded in spreading throughout much of the modern Islamic world.

In this special transmission scholars Ilhan Niaz, Yaqub Bangash, Maryam S Khan and Ishtiaq Ahmad join Raza Rumi and Murtaza Solangi to discuss the 75 years of history and the state that emerged in 1947 struggles to build a ‘nation’ and resolve issues of identity, governance, democracy and education. ... See MoreSee Less