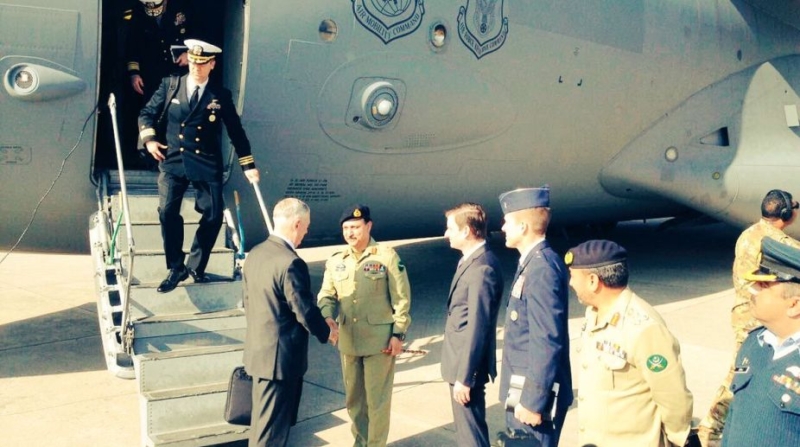 Despite the tough posturing by the United States and Pakistan, following the announcement of Trump’s South Asia strategy, both countries have resumed diplomatic engagement in recent weeks. The latest was the visit of US Defence Secretary James Mattis to Pakistan. While the divergence in their objectives and strategies continues, there seems to be a clear recognition that a bilateral break-up is neither feasible nor desirable. Both sides are pursuing delicate engagement to avert a complete rupture in the relationship.

The signals from Washington in recent months have not been favourable and hard talk by senior American officials indicated that a more confrontational approach towards Pakistan was on the cards in order to stabilise Afghanistan. The limits of US leverage over Pakistan have been clear for some time. But this year Islamabad’s China card, at least symbolically, indicates a measure of confidence in Pakistan’s approach to the tangled relationships with Afghanistan and the US.

Pakistan’s security calculations have undergone some revision. First, the US is not exiting Afghanistan anytime soon and guided by an assertive Pentagon, President Trump has signed off on a renewed military solution. Second, the US is no longer shy of courting India and it is clear that the latter is its long-term partner in the region. Therefore, New Delhi has a role in Afghanistan whether Pakistan likes it or not. The early inauguration of Chahbahar port and Indo-Iranian cooperation are hard facts to ignore. Third, the Chinese are still reluctant to have an overtly interventionist role in Afghanistan; and the non-state actors that Pakistan has historically supported – the Afghan Taliban and Lashkar e Taiba – are viewed as threats by Beijing as well. Finally, Pakistan’s economic situation, partly propelled by the military’s own political intervention in domestic politics, necessitates continued engagement with the US and even a repair of a deeply ruptured relationship.

A certain measure of resetting the strategy has also taken place within American policy circles. Many observers in Washington hold that Pakistan – despite its ‘perfidy’ – is needed to secure US interests in Afghanistan. And while India maybe the destination for US firms and necessary to balance regional power vis-à-vis China, it is Pakistan that can deliver on some if not all the goods when it comes to Afghanistan. Given the increased gulf between Washington and Tehran, once again Pakistan is key to finding a regional solution to the Taliban who are now assisted by Iran as well.

The larger question that should inform policy debate is how long are we willing to bank on violent extremists as tools of security. Especially when their brethren have wreaked havoc in Pakistan. And continue to do so

This is why Secretary Mattis’ talks with Pakistani leaders — civil and military — emphasised cooperation and addressing each other’s concerns, rather entering into any sort of blame game. While acknowledging our campaign against terrorism within national borders, the latter called for a ‘redoubling’ of efforts. Both sides made an attempt to find ‘common ground’ on the issue of terrorism, which is the cornerstone of US strategy in Afghanistan–at least in the public domain.

An unusually lengthy press-release from the Pakistani military came hot on the heels of COAS General Bajwa’s meeting with visiting Secretary Mattis; detailing Pakistan’s worries. The Army chief reiterated long-standing concerns about the growing Indian footprint in Afghanistan. Islamabad contends that New Delhi is using Afghan soil to undermine stability here and is therefore unhappy at its expanded role across our western border.

Pakistan’s refusal to play ball regarding US concerns has been made public by Gen John Nicholson, commander of US forces in Afghanistan. Days before Gen Mattis’ trip here – he told a Senate hearing that Islamabad had not acted upon the ‘clear’ demands made by Washington. Similarly, CIA chief Mike Pompeo suggested that the US will do ‘everything it can’ to destroy ‘safe heavens’ if we don’t follow through on American demands. Tough talk by senior Washington officials on the eve of Secretary Mattis’ visit increased pressure on Pakistan.

Gen Mattis, however, emphasised the critical role that Islamabad can play in cooperating with the US sand other parties to ‘facilitate a peace process in Afghanistan that brings stability and security to the region’. This suggests the presence of a deadlock on restarting the Afghan peace talks. Islamabad argues that it has time and again facilitated such processes but that these have been undercut by hostile elements within Afghanistan.

Thus in the wake of the Mattis visit — the bilateral relationship remains plagued by the key question: which side will act first to address other’s apprehensions? The way forward on this would be to evolve a bilateral mechanism, which provides both sides an opportunity to monitor progress made by the other; while verifying the actions it has undertaken. Only by way of such a ‘verification’ process can the bilateral relations progress. The US, contrary to what many pundits suggest, has to address Pakistan’s India-in-Afghanistan paranoia. It might be exaggerated but it defines policy; and therefore cannot be brushed aside. A good place to start might be to resume backchannel efforts to facilitate Indo-Pak talks. Especially given that the two countries have not been talking to each other for years.

For Pakistan, however, the stakes are perhaps much higher. Despite the propaganda that China is there to save us – the relationship with the US matters. It cannot be underestimated regardless of the hawkish (and sometimes sponsored) narratives that find their way into the media. There is a large Pakistani diaspora that transfers remittances, knowledge and technologies back ‘home’. ‘The US remains a big market for our goods and let’s not forget that we are still borrowing from international financial institutions such as the World Bank. Washington influences their policies and lending decisions, as Pakistani bureaucrats know rather well. All rhetoric of disengagement is meaningless unless this country’s elites reform the rotten tax structure, civil service and divert resources towards human development.

The larger question that should inform policy debate is how long are we willing to bank on violent extremists as tools of security. Especially when their brethren have wreaked havoc in Pakistan. And continue to do so. A larger and more real ‘Afghanistan’ exists beyond the Taliban prism. US pressure or not – it is in our long-term interest to move on.

Published in Daily Times, December 10, 2017: The relationship with US matters whether we like it or not