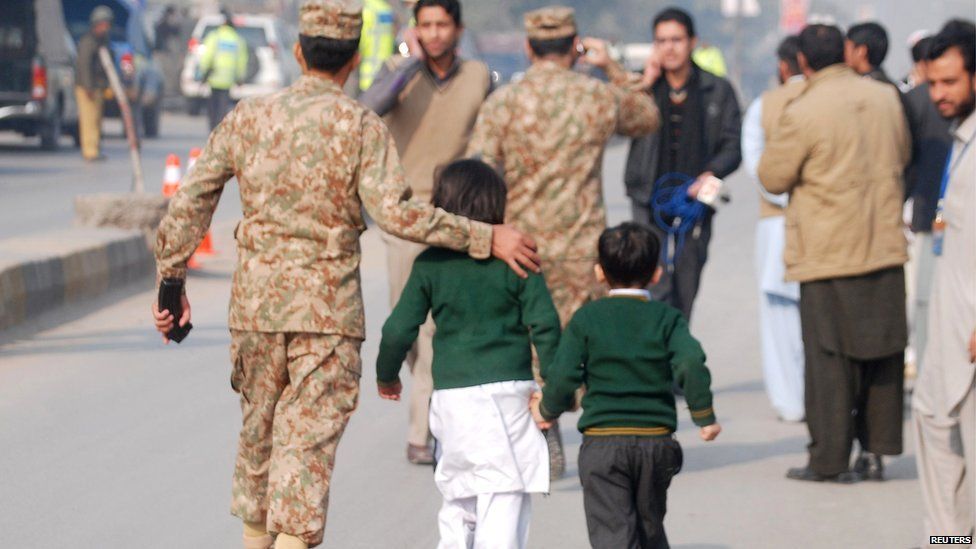 Pakistan’s predicament is a sad tale of domestic Islamist identity enmeshed with the regional dynamics.

The latest strike by the Pakistani branch of the Taliban movement has jolted the globe. It was not the first attack on civilians. Earlier, Pakistani markets, religious processions and Hazara settlements have been targeted, killings hundreds. But the barbarity of targeting children – killing 132 innocent students – has swung the public opinion in Pakistan. Pakistan’s military has been fighting the Tehreek-i-Taliban Pakistan (TTP) for the past few years. Since June this year, it launched a major offensive in North Waziristan region, claiming to have killed more than 1,000 militants and reclaiming nearly 80 per cent of the territory that they were holding. For the TTP to strike at an army-run school, killing 132 children and nine school staff, indicates that the network is far from being eliminated. Military sources think that this was an act of desperation on the part of the Taliban. Others view this as the ability of TTP to regroup and find softer targets.

The prime minister of Pakistan, Nawaz Sharif, in the wake of these attacks, called an emergency all-party conference where he vowed to fight terrorism, once again. The moratorium on death penalty has been lifted; because of it hundreds of convicted militants had not been punished. Human rights’ campaigners doubt it will work but there is widespread public support for hanging the terrorists. The second important decision announced by the PM is that Pakistan no longer distinguishes between the “good” (those who don’t attack Pakistan and are focused on Afghanistan) and the “bad” (anti-Pakistan) Taliban.

This is a crucial announcement even if its translation into policy is unclear and perhaps unachievable. Pakistan’s strategic view of the region is based on the threat perception from India and an Afghanistan that may allow Indian influence to grow on its western border. This is well documented in the defence literature and also articulated by strategic thinkers all the time. Will this worldview be revised or adjusted is something that remains to be seen.

Essentially, the Pakistani and Afghan Taliban share the same ideology and tactics and they have supported each other in the past. In fact, the emergence of the TTP shows the “strategic depth” doctrine has backfired.

It has been claimed by the civil-military leadership that the strategic depth doctrine is dead and a thing of the past. Opinion in Pakistan’s analysts is divided. Many agree that this failed doctrine may not hold anymore but others link it to the unchanged view on India and the threat that it poses. In fact PM Sharif’s efforts to amend the India policy have gone nowhere. The last time Pakistan came close to a shift was under the rule of General Pervez Musharraf (1999-2007) but the latter was ousted through a public movement backed by elements from within the intelligence agencies. Former foreign minister Khursheed Kasuri says that Musharraf was ousted because he was close to a settlement with India based on the famed four-point formula articulated through backchannel diplomacy.

This is why India-centric jihadi outfits operate with relative ease and autonomy. There is an argument that they are perhaps too powerful and their dismantling would create more splinters and sub-groups that will be difficult to control. All this theorising does indicate that there is no clear plan to tackle the jihad industry as a whole, which has fortified due to the regional conflicts as well as Pakistan’s espousal of jihad as an instrument of defence.

Another binding constraint that the Pakistani government faces is the powerful sectarian militant networks in the country which are organised across the country and operate madrassas and training centers with the financial support of Gulf countries and private donors there. These groups, especially the Lashkar-e-Jhangvi (LeJ) have vowed their support to TTP time and again. In fact several reports suggest that the foot soldiers of TTP are provided by these organisations.

Faced with this complex web of militancy and interlinked jihad outfits, Pakistan cannot simply wait for another attack of the Peshawar scale to hit its civilians. Since December 16, there is a clear shift in the public opinion. If Pakistan’s government and political parties were to use this opportunity to review the operations and components of jihad infrastructure there was no better time. The question is will they do it? Pakistan’s army chief along with DG ISI dashed to Kabul to discuss the possibility of limited operations along the border to target the TTP leadership. Support from Afghan President and NATO has already bolstered Pakistan’s morale. But the question remains if these operations will result in a comprehensive action against the entire Taliban movement or if it will be limited to the elements that are not in control of Rawalpindi.

It is difficult to predict. On the one hand, the US is pulling out of Afghanistan, and Pakistan will not want to lose influence in the region. On the other hand, the public pressure in Pakistan means that the state may have to target the “good” brethren of the “bad” Taliban. Pakistan’s predicament is a sad tale of domestic Islamist identity enmeshed with the regional dynamics. It needs the cooperation of Afghanistan and some assurance from India to undo the past trends. But the two suspicious neighbours are unlikely to do that. Especially India under Narendra Modi cannot be seen to be “weak” or “accommodating” towards Pakistan. This only complicates the issue and spells out the intimation of a violent, turbulent future for the region, especially Pakistan.