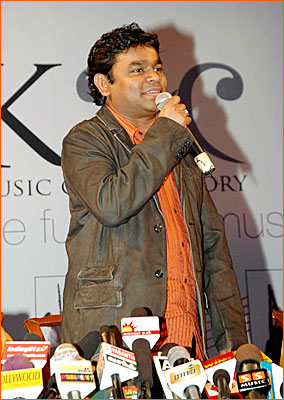 Music and Love share a primordial bond. None other than the legendary and a genius of our times Allah Rakah Rahman, better known to the world as A.R. Rahman appreciates it at a much deeper level. The composer who has been honoured by the world and the subcontinent, he is a follower of the Chishty school of Sufism.

After a glorious career path and adding melody to South Asian music, A R Rahman has set up a music conservatory in India dedicated to none other than Khawaja Ghareeb Nawaz of Ajmer. Two letters, K and M, are lucky for Rahman and also reflect his devotion to the great Saint, his teachings and all-encompassing spirituality.

This is perhaps why his latest composition for the film Jodhaa Akbar – Khawaja Meray Khawaja – is a matchless piece. It is subtle and moves at a pace akin to that of a lover’s – slow yet impatient, heavy and full of yearning. It is a separate matter that the film-maker turned it into a nightmare of pop-Sufi icons – whirling dervishes in medieval Ajmer and with fake beards.

Here is the Khwaja Meray Khawaja’s amazing track. Ignore the video – just listen to it. For lyrics and their competent translation.

May God bless AR for his music and search for the path.

My other favourites from A R Rahman are found below:

7,703 thoughts on “A R Rahman’s devotion to Khawaja Muinuddin Chishty”