A tale of love and death

The terrors of the living need not trouble you, Bibi, any more. You overcame all misgivings, calumnies and flaws inherent in mortal human beings by sacrificing your life. Rest in peace and may God’s angel of mercy keep guard on you 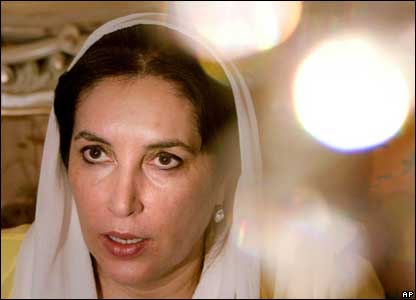 Henceforth you would know her only at the point timelessness begins and history melts into legend. Biographers will wrestle with the minutiae of her life and politics and she will keep stepping back into the mists of eternity challenging them to come further into the sacred mysteries of martyrdom.

There would forever be that haunting image of her total radiance, of an ecstatic communion with the people symbolised by a hand raised in joy, vanishing into the hazy vacuity of a frame suddenly emptied of her. She must have always wanted it this way; she must have believed that a people wronged by many would somehow be saved by her blood. Why else would she dare death as often as she did?

I got a glimpse of this destiny when I met Benazir Bhutto in Dubai on May 16 2007, the last year of her earthly life. I spoke to her about my fears then and wrote to her about them later. I saw her after a long time to find her as open, trusting and hospitable as ever. She was going to count on my discretion not to write of her plans till she revealed them herself but she, the chosen daughter of Zulfikar Ali Bhutto, was not going to watch her motherland descend into chaos. No, she turned my loaded questions around, she would not come to lead a revolution but to seek a peaceful democratic settlement.

I said that she might not have that choice. Could she have lived away for too many years and was thus unable to take a full measure of how much the country had already sunk into a vortex of violence? Where would she fit in the endless confrontation between a regime for which democracy was just a camouflage and those of its opponents who had no use for democracy anyway? She said she understood me, knew the threat to her life, but would I like it to deflect her from her responsibilities?

She was not deflected even by the death of more than 150 followers who perished on October 18 last year, the day of her homecoming. What the accounts of that immense tragedy kept missing was a new mystical bonding of the leader and the people in an ancient ritual of sacrifice. It was a fresh compact that exponentially enlarged the circle of support for her.

But the more she succeeded the more urgent was the need of her enemies to cut her down. She understood that their fear of her would also grow exponentially but in her lexicon of courage there was no word for turning back. Only death could sunder the covenant made in the blood of the innocent in Karachi on her return.

They say that BB should not have stood up in the hatch to become an easy target for the assassins lurking around her. They forget that the only potent weapon in her hand was the love that she inspired in the people which also left her with no option but to reciprocate. Mansoor Hallaj says: O you who blame love and blame it so often / If only you were aware of love’s tyranny, you would not blame it.

She stood up because of this tyranny of love. Tears used to well up in her eyes when she spoke of her years of lonely exile; only the toiling masses kept chasing the dream of a better tomorrow if she were to come back. The wretched of the Earth, she would say, drew strength from her and she drew her relentless energy from them.

This is what lifted her from the sheer banality of our political life. On Mark Antony’s death, Shakespeare makes Cleopatra say: And there is nothing left remarkable/ Beneath the visiting moonÂ. Something similar has happened to us. A fleeting light that dazzled like a meteor for a brief while has gone out. Ghalib saw the end of an era in the image of a dying candle the solitary flame of which being the only reminder of the painful severance from a night of joy. An era has ended for us too.

Life will carry on without the lustre of her presence. But every thing will have become a little more difficult. Her benighted people needed her charisma to heal the rupture between the rulers and the ruled. They were tired of obedience extracted out of them at the barrel of a gun, be it in the hand of the State or that of the modern-day terrorists, the new assassins of the Muslim history. They will miss her as a luminous symbol of the unity of a federation weakening with every insensitive flourish of a dictatorial arm.

Pakistan’s sprawling lumpen proletariat spurned those who told it that she would let it down and insisted on seeing in her a beloved princess of hope. Our neighbours saw an opportunity of peace in her return. It was not for nothing that President Karzai flew his flag at half-mast on her death and gracious words of sympathy came from India.

How Pakistan finds a way out of grief and bewilderment may well decide its destiny. It is an unspeakable grief that struggles to break out in a lament but gets smothered by the death of hope. Who will resurrect the hope without which this weary nation will find its journey even more arduous?

The terrors of the living need not trouble you, Bibi, any more. You overcame all misgivings, calumnies and flaws inherent in mortal human beings by sacrificing your life. Rest in peace and may God’s angel of mercy keep guard on you. Now it is our turn to walk the wilderness alone. The desert is pitiless and so far there is not a speck of a water-heavy cloud of regeneration. All that we can do is to look up to heavens and pray.

The writer is a former foreign secretary.