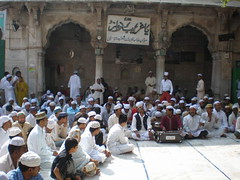 Ajmer Shareef is a spiritual centre-point in South Asia. It is not just another Muslim Saint’s dergah but represents the glorious tradition of inclusiveness and spirituality beyond the formal boundaries of religion, caste and creed. This is why it has become a fascinating rallying point for South Asians, regardless of what religion they profess and/or practice.

Next week, the death anniversary celebrations of Khawaja Moinuddin Chishti will start in Ajmer. Yesterday I was told that my visa processing would take ages and the outcome will be uncertain. The near-impossibility of getting there made me a little depressed. Yes I was planning to undertake this [mini]-pilgrimage this month.

Damn these visas and official hurdles. At the end of the day these have proved to be meaningless, only adding to the bad blood between the people of the two countries.

My friend Salman who lives next to the dergah and is from the line of shrine-keepers, wrote a piece for the Hindustan Times where he talks of the forthcoming Urs, its significance and place in India. Salman is a young and dynamic student of Sufism. May he stay the course! Read his articleÂ here.

Photo above was taken in 2006: On a crisp sunny-wintry afternoon, the pilgrim Qawwals sang in praise of the Khawaja. This was such an impromptu performance – I recall a verse – sab ki bigri hui, bana dey – Khawaja (Help all those who come to you – oops, this is a horrendous translation)…