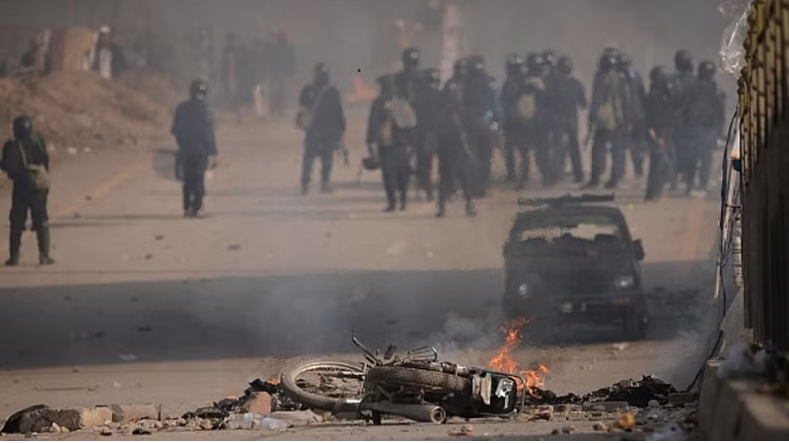 November 26, 2017: Islamist protests are a tried and tested way to bring change in government in Pakistan (The Print)

Saturday was a day of chaos worsened by partial media blackout, restrictions on social media and continuous circulation of conspiracy theories via WhatsApp in Pakistan.

Chaos in Islamabad may derail the civilian government

One police official dead, hundreds injured and major cities were in a state of panic after the Pakistan government launched a police preparation to disperse Islamist protestors and failed. By Saturday evening, the government asked the army to step in aid of civil power. The details of such ‘support’ are still being worked out.

For twenty days a group of fanatics, packaged as a new party called Tehreek-e-Labaikk Pakistan (TLP), besieged Pakistan’s capital city Islamabad. They were outraged by a minor amendment to the oath that politicians taken wherein they reaffirm their belief in the finality of Prophet Muhammad. For the Barelvi sub-sect of Sunnis this is an important issue but it has been patently politicized to pressurize the government. TLP had been demanding the resignation of law minister. The government did not fire the minister but it took back the amendments.

Some commentators hold that elements within the deep state may have backed them. Others hold it is a conspiracy by Nawaz Sharif and his party to involve the army and in a faceoff situation with civilian protestors. Conspiracies rule where the governance culture is not transparent and centre of powers are perennially pitted against each other.

After 20 days of in-action the federal government, under pressure from the superior judiciary decided to move against the Islamist groups which had paralyzed public life in twin cities of Rawalpindi and Islamabad. Local police backed by paramilitary Rangers and Frontier Constabulary (FC) moved in against protestors to clear-up the Faizabad interchange, a major traffic artery connecting twin cities of Rawalpindi and Islamabad, which had been occupied by protestors for weeks.

The law-enforcement forces moved in and used tear gas and shelling to disperse the protestors. But the TLP workers emboldened by their countrywide support responded by hurling stones and attacking police officials. Faizabad and adjacent localities turned into a war zone. More than 200 are injured.

News of police operation and subsequent clashes spread wildly across the country, through electronic and social media. Rioters and small groups of men started organizing protests in towns and cities across Punjab and Karachi. But most of disturbances were located in the Punjab, politically most important province for the state.

The military announced that its chief General Bajwa has advised against use of force and advocated for peaceful resolution of the issue. Later in the evening, media reported that federal government has asked military to send troops ‘in aid of civil power’ to restore normalcy to the federal capital.

Saturday was also a day of chaos worsened by partial media blackout, restrictions on social media and continuous circulation of conspiracy theories via WhatsApp. Reaching out to friends and colleagues was a nightmare. The government’s censorship followed inflammatory reporting on television where a few channels were clearly siding with the protestors and undermining the police action. As it transpired later, the advice sent by the regulator had been discarded. The civilian government resorted to the dire action of taking down transmissions which is almost always a self defeating and counterproductive step.

The standoff between protestors and law-enforcement continues. Protest leaders are now demanding resignations of whole federal cabinet and the Prime Minister and refusing to engage in any dialogue with authorities.

The million-dollar question is how Pakistan’s military will handle the explosive situation. Will it use force against protestors or act on its own advisory to the civilian administration to attempt to resolve the issue through ‘peaceful means’? The peaceful means here denote further chipping away of civilian authority in the country.

This is not new for Pakistan. Islamist protests have been a tried and tested instrument to effect change in government. As early as 1953, such mobilization was used to create an anarchic situation against the Bengali Prime Minister Khwaja Nazimuddin. In 1977, Zulfikar Ali Bhutto’s ouster through a coup took place after months of protests to enforce Shariah in the country.

The next 48 hours will determine what happens to the federal government headed by a loyalist of ousted prime minister Nawaz Sharif. By calling in the military, the civilian government has further weakened its standing. It did not handle the operation too well either and by creating a media blackout it has created a perilous situation for itself.

The opposition leader, Imran Khan, has once again reiterated his demand for early elections to resolve the political crisis in the country. Khan enjoys good relations with the security establishment so what he says is taken as a signal. However, a good number of civil society activists and senior analysts are worried that the fall of federal government may not lead to elections but a military backed government of technocrats.

This will be neither good for democracy nor the economy.