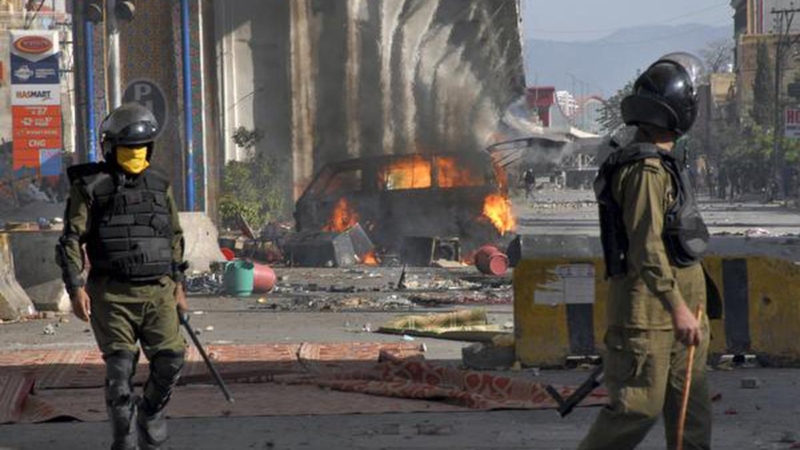 It seems that the ruling party Pakistan Muslim League (Nawaz) PMLN has entered the final round of its power struggle. With its party head disqualified as prime minister, the government is now besieged by angry fanatics in Islamabad and other parts of the country. As it has happened before in the country’s history the Army has been asked to move in aid of civil power. Where will this end is unknown. But it’s clear that political change is inevitable now.

For the past twenty days an angry group of Barelvi clerics had been protesting minor changes in the oath taken by elected officials. The move was opportunistically branded as a blasphemous act on the part of the government. As is the case, blasphemy ignites passions and mobilises scores of religious groups across the country. The government was wary of acting against this mob and perhaps it’s indecision has cost the country dearly. On Saturday, a police action could not disperse the protestors. The government blocked television channels, imposed restrictions on digital media platforms and called in the Army and Rangers to control the situation.

In 1953, similar action was taken against the protestors and within a month of that crackdown and intervention by the military, the then Prime Minister Khwaja Nazimuddin was dismissed. In 1977, another movement with express religious overtones resulted in bloodshed, military involvement and the infamous coup on the night of July 4, 1977. Subsequently, mobilisations against several governments took place with the intended effect: regime change through undemocratic means.

It is a pity that forty years later, nothing has changed in terms of inflaming religious passions and creating an anarchic situation. At the time of writing these lines, there is an uncertain trajectory ahead. Will the government survive? Will the events lead to a military takeover or a military backed national government? Or will the PMLN government, somehow, manage the variables in its favour?

Given the media blackout and rumour mongering that follows, it is difficult to assess where things are headed. But if the tweet posted by the military spokesman is any indicator, then it’s clear that the Army is struggling to remain a ‘neutral’ player, not fully in sync with the policy of the federal government. Major General Asif Ghafoor who heads the Inter Services Public Relations wing tweeted: “COAS telephoned PM. Suggested to handle Isb Dharna peacefully avoiding violence from both sides as it is not in national interest & cohesion.” The reference to ‘both sides’ is meaningful to say the least.

Just as we started to rejoice at state action in reining in sectarian networks — the political mobilisation of the majority sect comes as a reality check. Business continues as usual in the Islamic Republic of Pakistan

Members of the political class have been making relevant noises. The PPP has done its usual lip service to democratic continuity though its recent positions have been visibly supportive of the establishment’s ‘overthrow’ of Nawaz Sharif and his continued role in national politics. Imran Khan has called for early elections and it is not unthinkable that both these parties would like to see the House of Sharifs fall and splinter, thereby paving the way for a changed political arena that may provide them greater space. If things were to continue, PMLN despite all odds would win the 2018 elections in the Punjab; thus making it a contender for federal government, once again.

Nawaz Sharif’s refusal to accept the July putsch by the Supreme Court as a fait accompli was not fully anticipated while the 2017 political engineering was in full swing. Sharif not only pushed back and mobilised public opinion in his favour — he managed to retain control over his party and influence over the federal government. This is what has made the task of easing him out far more difficult. His party’s government is an active source of patronage vital for the next elections. In addition, his rhetoric is akin to that of an opposition leader and is beneficial to the party’s fortunes come the  2018 electoral contest. More importantly, if the current dispensation continues the PMLN will secure a majority in the Senate. Therefore, the stakes are high for those who want to see Nawaz Sharif’s exit from the political landscape.

Perhaps this is why the embattled government’s fate remains uncertain and perilous. The standoff with the Mullahs may end without regime change but the mobilsiation of Barelvi clerics, madaris and networks is ominous. Barelvis are a majority sub-sect of Sunni Muslims in Pakistan. Their weaponisation is arguably the worst outcome of the power struggle in Islamabad. We have been suffering the onslaught of extremist variants of Deobandi clerics and with the Barelvi power turning violent, Pakistan is headed towards a disastrous path.

Just as we started to rejoice the state’s action to rein in sectarian networks, the political mobilisation of the majority sect comes as a reality check. Business continues as usual in the Islamic Republic of Pakistan. A tottering democracy, visionless and opportunist politicians, armed Mullahs and the lurking saviour-autocrat[s] or maybe technocrats in waiting.