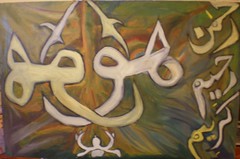 This is a painting that I revisited and converted its earlier abstract form into a calligraphic experiment. Now the challenge was that in addition to the lack of training in oil painting, I was also a novice in calligraphy. Anyway, the image inside Rumi’s tomb that IÂ posted on this blog earlier as well as the three attributes of the Almighty helped me in putting this together. The letters in the centre areÂ HuÂ (affirmation of the Divine presence and a Sufi chant) and its mirror image. In Rumi’s words:

This was truly inspirational as I remembered the lines with a brush in my hand. Another little flash was the three words that I have remembered abundantly thanks to a guide. Alas, I am out of touch with him.

The three words, familiar and lyrical, on the right side of the painting represent the key attributes of Allah :Â Ar-Rahman(the Beneficient),Â Ar-RaheemÂ (the Merciful),Â Al-KareemÂ (the Generous).

Muslim mystics have chanted these names since centuries in the quest to attain inner peace and closeness to Divine consciousness.

With this little feat, I am sort of feeling peaceful myself.