I was quoted in this NYT article on Lahore 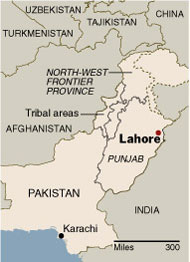 Still, Raza Rumi, a writer and blogger who takes great pride in his city, insisted that â€œIslamic extremism has had very little appeal here.â€ The cultural life of Lahore goes on, as it has for centuries.

He said that a recent stage play, â€œHotel Moenjodaro,â€ whose theme was against religious fundamentalism, drew a packed audience. â€œIt was very encouraging,â€ Mr. Rumi said.

Nonetheless, he said, the Hall Road incident and the juice store blasts were alarming. â€œIf the traders, the merchant class, which forms the bulk of the middle class of Lahore, becomes Talibanized, then the whole complexion of the city will change,â€ he said. â€œThatâ€™s a fear amongst the secular intelligentsia and elite of Lahore.â€