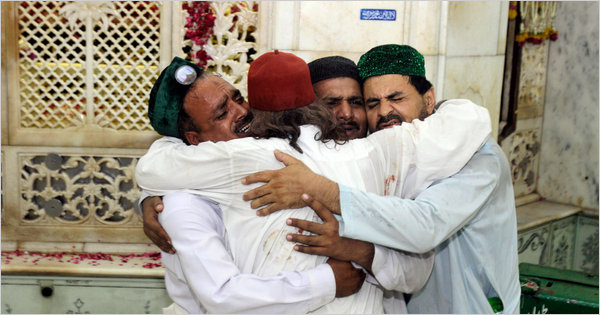 I was quoted in this piece – wish the references were made in a less tragic context.

By SABRINA TAVERNISE and WAQAR GILLANI

ISLAMABAD, July 1 â€” Two suicide bombers struck Pakistanâ€™s most important Sufi shrine on Thursday night, a devastating attack by hard-line militants on the moderate, more flexible blend of Islam that is practiced by most Pakistanis.(Photo right below

Pakistani volunteers removed a body from the Data Ganj Baksh shrine in Lahore, Pakistan, on Friday).

The bombers attacked in the city of Lahore just before midnight, the peak worship time for the shrine, known as Data Ganj Baksh. Thousands of people were at the shrine at the time, according to the Pakistani police. At least 37 were killed and 175 injured, according to police officials.

The strike on such a revered place of worship is certain to enrage Pakistanis, who are growing weary of violence that has spiked in the past four years. It is part of a pattern of increased violence in Pakistanâ€™s heartland, the province of Punjab, a troubling expansion of the Taliban insurgency tormenting the countryâ€™s western border.

â€œThis is a barbaric attack,â€ wrote Raza Ahmed Rumi, a Pakistani expert on Sufism, on his Web site. The shrine, he said, â€œis not just another crowded place â€” it represents a millennia of tolerant Sufi Islam which is directly under attack by the puritans.â€

The bombers detonated their explosives in the basement and inside the shrine, after a Sufi ceremony of singing and prayer, according to a witness, Muhamed Yusef, who was interviewed on Pakistani television. The police retrieved the heads of two of the bombers and estimated their ages as 17 and 22, the television reports said.

The blasts left a sickening scene of devastation. The Express 24/7 television network in Pakistan showed the shrineâ€™s interior littered with bodies, prayer rugs and debris from the blast. Blood pooled on the white marble floor. Crowds gathered outside the shrine after the bombing, shouting, crying and protesting the attack.

â€œThose who still pretend that we are not a nation at war are complicit in these deaths,â€ said Farahnaz Ispahani, a spokeswoman for President Asif Ali Zardari.

Sufism is a mystical form of Islam brought into South Asia by wandering thinkers who spread the religion east from the Arabian Peninsula. They carried a message of equality that was deeply appealing to indigenous societies torn by caste and poverty. To this day, Sufi shrines stand out in Islam for allowing women free access.

In modern times, Pakistanâ€™s Sufis have been challenged by a stricter form of Islam that dominates in Saudi Arabia. That orthodox, often political, Islam was encouraged in Pakistan in the 1980s by Gen. Mohammad Zia ul-Haq, the American-supported dictator. Since then, the fundamentalistsâ€™ aggressive stance has tended to eclipse that of their moderate kin, whose shrines and processions have become targets in the war here.

In March 2009, militants in western Pakistan blew up the Rahman Baba shrine, the burial place of a revered Sufi poet. Data Ganj Baksh, or Giver of Treasures, draws Muslims from all over Pakistan and is the symbol of Lahore, Pakistanâ€™s cultural capital.

The shrine is dedicated to a Persian-speaking mystic, Ali bin Usman al-Hajveri, who journeyed to Lahore with Central Asian invaders in the 11th century. He settled outside the city, a stopover on the trade route to Delhi, started a meditation center and wrote a manual on Sufi practices.

â€œHow long will we be mere spectators and see our great city blown to bits â€” culturally and physically?â€ Mr. Rumi wrote. He said that threats last year caused the shrine to close for a few days. â€œThis time the worst of nightmares has come true.â€